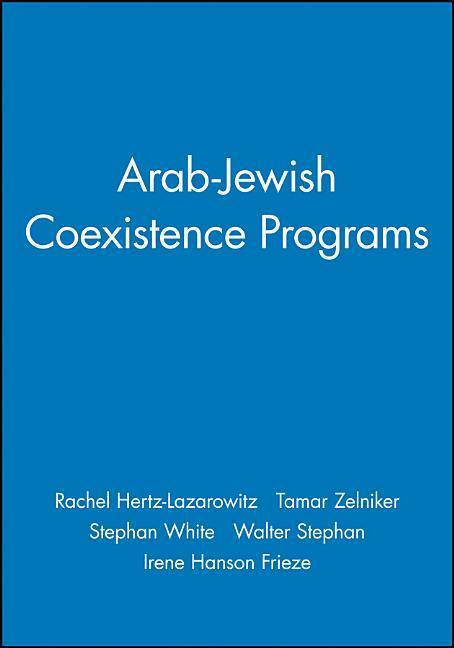 Introduction to Improving Arab-Jewish Relations in Israel: Theory and Practice in Coexistence Educational Programs (Cookie White Stephan, Rachel Hertz-Lazarowitz, Tamar Zelniker, and Walter G. Stephan).Nature, Rationale, and Effectiveness of Education for Coexistence (Daniel Bar-Tal).A Narrative-Based View of Coexistence Education (Gavriel Salomon).Storytelling as a Way to Work Through Intractable Conflicts: The German-Jewish Experience and Its Relevance to the Palestinian-Israeli Context (Dan Bar-On and Fatma Kassem).Coping With the Jewish-Arab Conflict: A Comparison Among Three Models (Rachel Ben-Ari).Planned Encounters Between Jewish and Palestinian Israelis: A Social-Psychological Perspective (Ramzi Suleiman).Promoting Coexistence by Means of Conflict Education: The MACBE Model (Helena Syna Desivilya).Existence and Coexistence in Acre: The Power of Educational Activism (Rachel Hertz-Lazarowitz).The Jewish-Palestinian Encounter in a Time of Crisis (Rabah Halabi and Nava Sonnenschein).Arab-Jewish Bilingual Coeducation in Israel: A Long-Term Approach to Intergroup Conflict Resolution (Zvi Bekerman and Gabriel Horenczyk).Education for Coexistence and Arab-Jewish Encounters in Israel: Potential and Challenges (Mohammed Abu-Nimer).Culturally Sensitive Education: Adapting Self-Oriented Assertiveness Training to Collective Minorities (Marwan Dwairy).Coexistence Is in the Eye of the Beholder: Evaluating Intergroup Encounter Interventions Between Jews and Arabs in Israel (Ifat Maoz)

Rachel Hertz-Lazarowitz (Ph.D.) is a social-educational psychologist at the Faculty of Education at the University of Haifa. The social psychological principles of cooperation inspire her work. Her areas of research include cooperative pedagogy and the study of existence and co-existence of different ethnic and national groups in Israel. She has published widely in English and Hebrew. Her edited book (with Norman Miller), Interaction in Cooperative Groups: The Theoretical Anatomy of Group Learning, was published in 1992. Tamar Zelniker is a senior lecturer in the Psychology Department at Tel-Aviv University, and the head of the Graduate Cognitive Psychology Program. Her research interests are in the areas of cognitive development, theories of mind and cooperative learning. She has published journal articles and chapters on cognitive style in young children, and an edited book (with Tamar Globerson), Cognitive Style and Cognitive Development (1989). Dr. Zelniker has been co-director of a Palestinian-Israli academic training program (1995-1999), and is one of the founders of a new academic program of studies in Gaza, where she has been on the academic board since 1995. Cookie White Stephan is Emeritus Professor of Sociology at New Mexico State University. She received her Ph.D. in psychology from the University of Minnesota in 1971. Stephan's major research focus is on intergroup relations, specifically the antecedents of prejudice and ethnic identity. With Walter G. Stephan, she is the author of Intergroup Relations (1996), and Improving Intergroup Relations (2001). Walter G. Stephan received his Ph.D. in psychology from the University of Minnesota in 1971. He has taught at the University of Texas at Austin and at New Mexico State University where he currently holds the rank of Emeritus Professor. He has published articles on attribution processes, cognition and affect, intergroup relations, and intercultural relations. He co-authored, with Cookie Stephan, Intergroup Relations (1996), and Improving Intergroup Relations (2001). He has also published Reducing Prejudice and Stereotyping in the Schools (1998), and is co-authoring, with W. Paul Vogt, Multicultural Education Programs: Research and Theory (forthcoming).

Taschenbuch
Latinos and Latino Immigrants in the…

Taschenbuch
Ethnic Prejudice and Discrimination in…