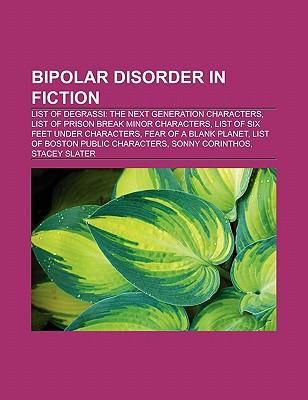 Source: Wikipedia. Pages: 80. Chapters: List of Prison Break minor characters, General Hospital, List of Six Feet Under characters, Fear of a Blank Planet, Degrassi: The Next Generation, Next to Normal, Law & Order: Special Victims Unit, Shutter Island, List of Johnny the Homicidal Maniac characters, List of minor CSI: Miami characters, Stingers, Huff, Traders, Michael Clayton, Observe and Report, The Line of Beauty, The Informant!, List of family members and friends in ER, Urban Legend, Storylines of Shortland Street, Lithium, Misery, The House of Yes, Manic, Brains, Brains and Automobiles, Failure to Communicate, The Game-Players of Titan, Manic Depression, Mad Love, The Best Awful There Is, Catch Me When I Fall, Sylvia, Shelf Life, Mr. Jones, Lady Oracle, Recipe for Murder. Excerpt: This article contains a list of minor characters in the American television series, Prison Break. The listed characters are those who are played by guest stars. The characters are listed alphabetically by their last name or by the name which appears in the episode credits. Jonathan Krantz, or the "Pad Man" to fans (played by Leon Russom) is the main antagonist in the series. He is the leader of The Company and holds the rank of General. He appears only fleetingly in his first two seasons, as William Kim's shadowy superior and architect of Michael Scofield's incarceration at Sona. The character plays a large and important role in season 4, appearing in every episode although being credited as a guest star instead of being in the main credits. In earlier seasons, he is identified by his tendency to issue orders on notepads, to avoid being recorded, a tendency which he fully abandons by the fourth season. In his appearance in the season 4 premiere, he discovers that James Whistler, the man Michael was forced to break out of Sona, is a traitor. After Whistler's betrayal, he orders drastic measures to be taken against The Company's enemies, dispatching the ruthless assassin Wyatt to kill anyone and everyone necessary to achieve those ends. Meanwhile, in the initial stages of his season 4 character arc, the General is not aware of the A-team's efforts to steal Scylla and most early episodes of the season deals with him planning a sinister operation in Laos, and interacting mostly with Wyatt and the Scylla Cardholders. As the season unfolds, Michael and his team eventually learns of the General's identity and his place as the leader of The Company, and he gradually comes to the forefront of the plot with increased screen time with the protagonists as a consequence. When it's reported that Agent Don Self did an identity search on the General, he seems to be very shocked and gives Wyatt the order to keep an eye on Self. In "Safe and Sound", it is revealed to the viewers that