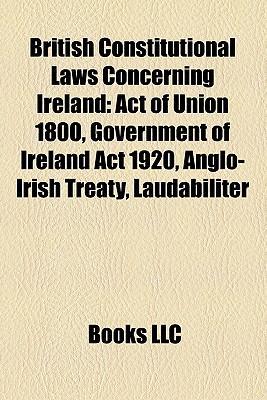 Source: Wikipedia. Pages: 32. Chapters: Acts of Union 1800, Government of Ireland Act 1920, Anglo-Irish Treaty, Laudabiliter, Government of Ireland Act 1914, Irish Land Acts, Party Processions Act, Disqualifications Act 2000, Roman Catholic Relief Act 1829, Irish Free State Act 1922, Eire Act 1938, Irish Church Act 1869. Excerpt: Laudabiliter was a papal bull issued in 1155 by Adrian IV, the only Englishman to serve as Pope, giving the Angevin King Henry II of England the right to assume control over Ireland and apply the Gregorian Reforms in the Irish church. The Norman invasion of Ireland ensued in 1169-71 under the pretext of this bull following the intervention of Richard de Clare a Hiberno-Norman knight from Wales, retained by the King of Leinster, Diarmuid MacMorrough in his fight to regain his kingdom and the throne of the High King of Ireland. The kings of England, from Henry II (1171) until Henry VIII (1541), derived the title and the authority Lord of Ireland from this Bull. Subsequently, with the declaration of the independence of the Church of England from Papal Supremacy, a new basis for the English monarch's claim to the rule of Ireland was needed: the Crown of Ireland Act 1542 therefore established a sovereign Kingdom of Ireland with Henry being given the title of King of Ireland. There has been some controversy over the authenticity of the Laudabiliter and the possibility of its having been a forgery. A Papal bull of Pope Urban VIII, 1637, sealed with a leaden bulla.A bull is a Papal letter that takes its name from the bubble-shaped, leaden seal which it bears. However historians such as Laurence Ginnell, believe the letters written in the 12th century relating to Ireland were never sealed with any seal and are not correctly called bulls but rather privilegia or privileges. The original bulla was a lump of clay molded around a cord and stamped with a seal. When dry, the container cannot be violated without visible damage to the bulla, thereby ensuring the contents remain tamper-proof until they reach their destination. Stephen J. McCormick, in his preface to The Pope and Ireland, notes that it is was well known that the forgery of both Papal and other documents was fairly common in the 12th century. Citing Professor Jungmann, who in the appendix to his Dissertationes Historioe