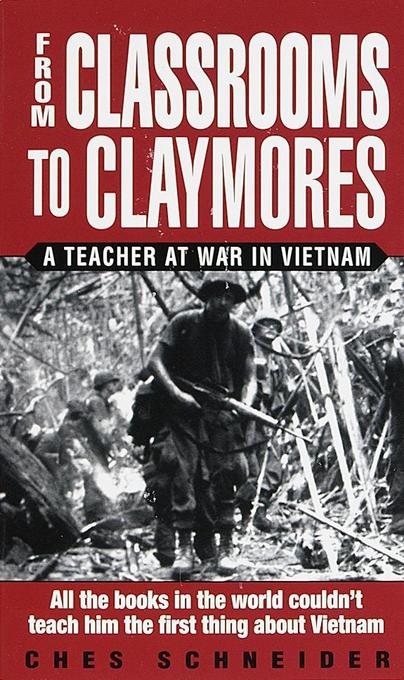 From Classrooms to Claymores: A Teacher at War in Vietnam

By late 1969, the end of the war was just over the horizon. But for Ches Schneider, a drafted schoolteacher turned infantry grunt in the deadly Central Highlands, it was … weiterlesen

Titel: From Classrooms to Claymores: A Teacher at War in Vietnam
Autor/en: Ches Schneider

"Vietnam was a fantasy life of gunfire, blood,
heat, and superhuman toil."

By late 1969, the end of the war was just over the horizon. But for Ches Schneider, a drafted schoolteacher turned infantry grunt in the deadly Central Highlands, it was just beginning. This story of a Missouri boy, told with grit and honesty, describes the stark transition from the normalcy of schooldays to the life-and-death drama endured daily in Vietnam's bloody jungles.

As a soldier in the 1st Infantry Division, Schneider went out on twelve-man search-and-destroy combat missions, never knowing whether the next moment would bring an ambush, a firefight, or eternal oblivion. Later, when the Big Red One rotated back to the U.S., he was transferred to the 1st Cav and fought it out with the NVA in the steamy jungles of Phuoc Long Province near the Cambodian border. As an ordinary man in extraordinary times, Schneider realistically captures the pain, loss, sacrifice, and courage of the men who fought for their lives even as the war wound down . . . .

Ches Schneider has been teaching English and history since 1966. During 1969 and 1970, he served in two combat units, the First Infantry Division and the First Air Cavalry, in the Republic of Vietnam. His military awards include the Combat Infantryman Badge, the Bronze Star for Valor, the Army Commendation Medal, an Air Medal for twenty-five combat assaults, and various Vietnamese citations. After serving in Vietnam, Ches returned to the Parkway School District and, in addition to his teaching responsibilities, has been the Department Chair of Unified Studies (a combination of English and history) for twenty-five years. He has coached track and football for seventeen years and is currently active in student-teacher development for various universities in the St. Louis area. As an educational consultant for the Reading Across Disciplines (RAD) program, Schneider has given seminars nationwide.

Schreiben Sie eine Bewertung für: From Classrooms to Claymores: A Teacher at War in Vietnam