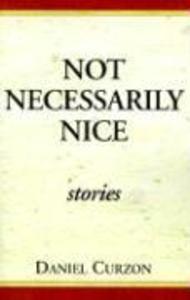 Born DANIEL RUSSEL BROWN, CURZON received his Ph.B. from the University of Detroit in 1960, his M.A. from Kent State
University in 1961, and his Ph.D. from Wayne State University in 1969. He has taught at a number of universities since 1962; from 1980 until his retirement, he taught at the City College of San Francisco as an instructor in English.
He is the author of Something You Do in the Dark, first published by G. P. Putnam in 1971 and which may be considered as the first gay protest novel. It is the story of a gay man's attempt to avenge his entrapment by a Detroit vice squad police officer by murdering him.
Curzon has written other novels, including The Misadventures of Tim McPick (original title: Queer Comedy), From Violent Men, Among the Carnivores, The World Can Break Your Heart, Curzon in Love, The Bubble Reputation, or Shakespeare Lives!, and What a Tangled Web. His non-fiction books include The Big Book of In-Your-Face Gay Etiquette and Dropping Names: The Delicious Memoirs of Daniel Curzon. This last was described by Ian Young in Torso as "ferociously honest and very funny" and by Philip Clark in Lambda Book Report as "a blunt, hilarious, page-turning ride that is...impossible to put down."
Curzon edited and published the early homophile magazine "Gay Literature: A New Journal" in 1975 and 1976. The magazine included poetry, fiction, literary reviews, essays, photography, and short plays. Curzon's own written work sometimes was included. Curzon contributed articles for other magazines such as "Gay Times" in 1976 and "Alternate" in 1978.
In the theater, Curzon won the 1999 National New Play Contest for Godot Arrives, and has won many other play contests, such as the Great Platte River Play Contest. His play My Unknown Son was produced off-Broadway at the Circle Rep Lab in 1987 and at the Kaufmann Theatre in 1988, as well as in Los Angeles in 1997. Baker's Plays published Curzon's one-act play, A Fool's Audition. Eleven volumes of his Collected Plays have been published already. Curzon's latest full-length play is "The Importance of Being Cecily, or Cecil" (an alternate reality to Oscar Wilde's play). His plays have also been performed at such theaters as Theater Rhinoceros, New Conservatory Theater, New City Theater, Above Board Theater, as well as at the Fringe Festival in San Francisco and the Edinburgh Fringe Festival.