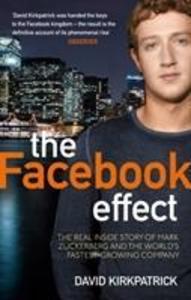 Today - six years after it was created in a Harvard dorm room - over 500 million people use Facebook regularly, in just about every country on earth. That a company this powerful and influential was started as a lark by a couple of 19-year-olds makes it a fascinating and surprising tale. That one of them, the visionary Mark Zuckerberg, had the maturity, strategic smarts and luck to keep his company ahead of its rivals anchors the tale.

With exclusive inside access to all the company's leaders David Kirkpatrick tells of the vision, the tenacity, the refusal to compromise, and the vision Zuckerberg has to remake the internet. A brilliant and fascinating cast of characters created Facebook and Kirkpatrick has interviewed all of them. Never before have Zuckerberg and his closest colleagues told what really happened as they built their dynamo while eating fast food, staying up all night, and thumbing their noses at how things are usually done.

David Kirkpatrick was for many years the senior editor for internet and technology at Fortune magazine. While at Fortune he wrote cover stories about Apple, IBM, Intel, Microsoft, Sun, and numerous other technology subjects. More recently he organized the Techonomy conference on the centrality of technology innovation for all human activity. He is a member of the Council on Foreign Relations and appears frequently on television, radio, and the Internet as an expert on technology. He lives in New York.