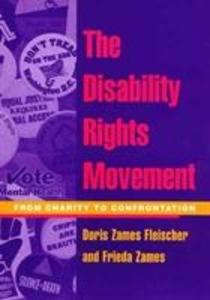 14% Rabatt sichern mit Gutscheincode: LIEBE14
​
Based on interviews with almost a hundred activists, this book provides a detailed history of the struggle for disability rights in the United States. It is a complex story of shifts in consciousness and shifts in policy, of changing focuses on parti … weiterlesen
Geschenk per Mail versenden
Taschenbuch

From Charity to Confrontation.
Sprache: Englisch.

Based on interviews with almost a hundred activists, this book provides a detailed history of the struggle for disability rights in the United States. It is a complex story of shifts in consciousness and shifts in policy, of changing focuses on particular disabilities such as blindness, deafness, polio, quadriplegia, psychiatric and developmental disabilities, chronic conditions (for example, cancer and heart disease), and AIDS, and of activism and policymaking across disabilities.Referring to the Americans with Disabilities Act as "every American's insurance policy", the authors recount the genesis of this civil rights approach to disability, from the almost forgotten disability activism of the 1930s to the independent living movement of the 1970s to the call for disability pride of the 1990s. Like other civil rights struggles, the disability rights movement took place in the streets and in the courts as activists fought for change in the schools, the workplace, and in the legal system. They continue to fight for effective access to the necessities of everyday life -- to telephones, buses, planes, public buildings, restaurants, and toilets.The history of disability rights mirrors the history of the country. Both World Wars sparked changes in disability policy and changes in medical technology as veterans without limbs and with other disabilities returned home. The empowerment of people with disabilities has become another chapter in the struggles over identity politics that began in the 1960s. Today, with the expanding ability of people with disabilities to enter the workforce, and a growing elderly population, issues like longterm care are becoming increasingly significant at atime when HMOs are trying to contain healthcare expenditures.

"More than a history, The Disability Rights Movement documents the wrenching evolution of attitudes: From isolation and charity to confrontation and rights; from sheltered workshops to independent living; from telethons of pity to technology's power; from 'cripples' and 'invalids' to People with disabilities! Comprehensive and well-written, Fleischer and Zames capture the substance and spirit of the disability rights movement and bring it to life." --Frederick A. Fay, Ph.D., Chair, Justice for All, and disability rights advocate for four decades "Doris Zames Fleischer and Frieda Zames take the reader on a guided tour through the still-brief history of the Disability Rights Movement, and they draw upon many first-person accounts to enrich the narrative. Although I was 'present at the creation' of much of this, I still learned a great deal. A unique feature of this book is the first-hand recounting of the remarkable work of the Disabled in Action (DIA) of New York. This group never gave up in their struggle to make the nation's biggest city accessible, despite enormous odds and powerful political opposition. Their story alone is worth the price of this book." --Frank G. Bowe, Ph.D., Professor, Hofstra University, and author of Physical, Sensory and Health Disabilities "Frieda Zames and Doris Zames Fleischer have crafted the most comprehensive history of the disability rights movement to date. Many firsthand sources and never-before-published interviews make this a must-read for anyone seeking to understand the roots of today's most pressing disability rights issues." --Mary Johnson, Editor, Ragged EDGE "This eye-opening work...offers one of the first thorough histories of a movement for civil rights that has profoundly changed America. ... A fascinating book." --The Sacramento Bee (online) "Here at last is a book about our civil rights movement written by one of us: Frieda Zames, a polio survivor and activist...The Disability Rights Movement stands out for its insiders' point of view and the sheer thoroughness of ground covered. ...the authors turn what could have been a rather dry historical book into one that absolutely compels us to read on. They accomplish this not only through meticulous research, but also through their inclusion of information and opinions gleaned from interviews with movement leaders and other people whose lives have been directly affected. ...[the book] is far more than just a history book. It's a cautionary tale of rights won and now in jeopardy. It's a tale of a people who have won some legal battles but still face mass discrimination each day. ... It is an excellent beginning..." --Sally Rosenthal "Fleischer and Zames offer an encyclopedic treatment of the development of the disability rights movement...[They] provide a useful starting point for inquiries into a plethora of disability rights issues." --New Political Science