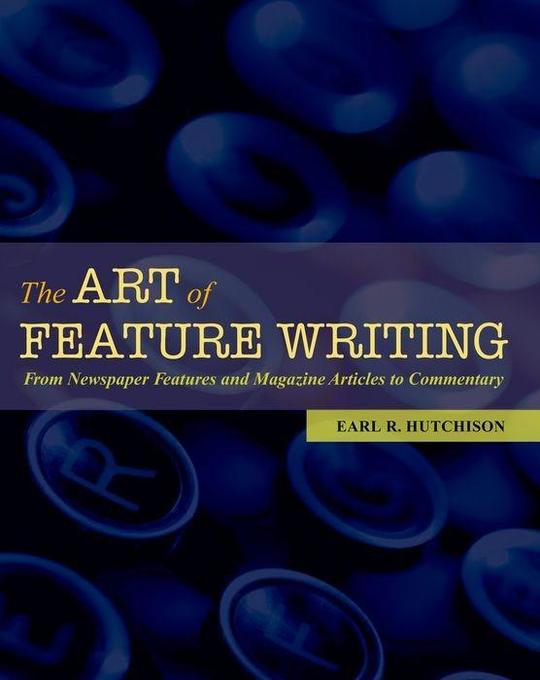 The Art of Feature Writing

From basic newspaper features to in-depth magazine articles and incisive commentary, The Art of Feature Writing introduces students to the myriad tasks of a journalist--including researching, interviewing, organizing, writing and marketing. Replete with accessible, dynamic examples drawn from a variety of diverse sources, this book takes a step-by-step approach to give students the skills, tools and confidence they need to produce their own distinctive material.
With the encouraging voice of an experienced teacher, Hutchison imparts sensible advice on both the craft of writing and the more practical concerns of a freelancer. The book is enhanced by rich pedagogical features including key points, chapter summaries and numerous exercises. From writing a lead that sings to the income tax implications of a freelance career, The Art of Feature Writing helps students generate compelling copy as they develop a more sophisticated understanding of the career of a writer.

Earl R. Hutchison is Professor and Director of the Communication Program at Tennessee Technological University. He brings a diverse professional and academic career to his writing. He was, for example, an arc welder for General Motors, and he also ran a cattle farm for ten years. After serving five years in three infantry divisions (30th, 24th, and 82nd) as a rifleman, platoon leader, and jumpmaster, he earned degrees leading to a Ph.D. at the University of Illinois at Urbana-Champaign, the University of Missouri-Columbia, and the University of Wisconsin-Madison. He has also been an assistant editor on a weekly newspaper, an assistant editor on a small daily newspaper, and a general assignment reporter on a large daily newspaper. He is the author of Writing for Mass Communication, Second Edition; Tropic of Cancer on Trial: A Case History of Censorship; and coeditor of Mass Media and theLaw: Freedom & Restraint. His television play, TKO, was produced by CBS. More than 3,000 of his news stories, features, reviews, and articles have appeared in newspapers and magazines.