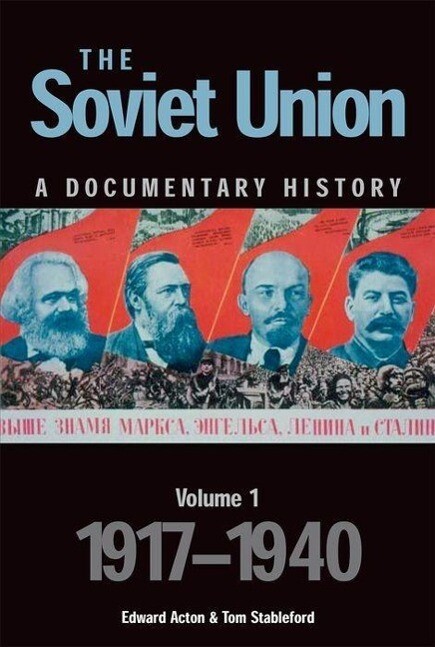 von Edward (School of History, University of East Anglia) Acton, Tom Stableford
1917-1940. 6 maps. Sprache: Englisch.
Taschenbuch
This is the first volume of a new integrated documentary history of the Soviet Union. The Soviet story looms large in history syllabuses across the world. This book will be a valuable resource for students at all levels, drawing upon the primary mate … weiterlesen
Geschenk per Mail versenden
Taschenbuch

This is the first volume of a new integrated documentary history of the Soviet Union. The Soviet story looms large in history syllabuses across the world. This book will be a valuable resource for students at all levels, drawing upon the primary material that has come to light since the collapse of Communist rule in 1991. Combining lucid narrative commentary and a rich selection of evocative documents, it provides a lively entree to current debate over humanity's most momentous and tragic experiment. This volume is organized into three chronologically distinct parts, subdivided thematically and embedding over 200 documents. Key terms and references to individuals, places, events and institutions are explained and guidance provided on significant features of the primary sources. Edward Acton is Professor of Modern European History at the University of East Anglia. Tom Stableford is Assistant Librarian, Slavonic and East European Collections, Bodleian Library, Oxford.

Contents Part 1 Revolution and Civil War (1917-1921): The February revolution and the Provisional Government The Bolshevik seizure of soviet power Bolshevik state, Orthodox church Soviet power and the peasantry The other Russia: a "third way" or dictatorship? Terror The crisis of "war communism" Part 2 The Period of the "New Economic Policy" (NEP) (1921-1928): The economy, the market and planning The state, the party and the leadership struggle Soviet power and the intelligentsia Church and state Part 3 Soviet Society under Stalin (1928-1940): Collectivization and the peasantry Industrialization and the working class Intelligentsia, opposition and terror Church and state

The commentary is by Edward Acton, Professor of Modern European History at the University of East Anglia, who has published widely on the Russian revolution and the history of Russia and the USSR. The documents have been translated by Tom Stableford, Assistant Librarian, Slavonic and East European Collections, Bodleian Library, Oxford.

This book contains a wealth of Soviet documents of enormous interest. Marxist Review 200603 As you can probably tell I think this book is certainly a welcome addition to the documentary histories of the Revolution, and would merit inclusion in your class library. Professor Acton has provided valuable insights in his narrative and a range of sources which enhance our understanding. To complement this he has also given extensive footnoting, biographical, place and general indexes, suggested further reading and glossary of Russian words. [...] But this book is more than a sum of its parts. His selection of sources and his commentary readily engages you with the major debates and with the big themes, but it also takes you to the personal and the local. In doing this Professor Acton makes you feel part of the ongoing discussion, provokes you to consider again the issues and takes you to new interpretations. History Teaching Review Year Book, Vol. 20 2006 ... it is difficult to imagine it being bettered as an aid to teaching, and it should find its way onto the shelves of every school, college and university library where Soviet history is taught. History, Volume 92, No 305 200701 What is most striking about Soviet Union is the amount and variety of documentation, as well as the balanced and incisive commentary which accompanies it... Finally, the volume also includes helpful sections such as a glossary of Russian words and acronyms, a guide to further reading, a map section, and a superb forty-three page bibliographical index. To sum up, then, this is an excellent research or educational resource, and may be used in-class either for supplementary primary source reading or as a textbook in its own right. The softcover edition is also attractively priced at about one-third the hardcover cost. The Russian Review, Vol. 66, No 1. 200701 ... superb volume of documents. Acton and Stableford succeed admirably in their task, presenting a balanced selection of documents which offer a multifaceted picture of the turbulent events of the first two decades of Soviet history. The documents on the revolution are especially illuminating and well chosen. They capture the drama of the revolution as well as the immense political uncertainties of the period in a way that other English-language documentary collections do not. The combination of first-hand accounts from a spectrum of different political actors (inside and, especially, outside the Bolshevik Party) and official documents brings the reader back into those times, recreating the fears and hopes generated by 1917."Overall, this collection is an invaluable textbook, which will be extremely useful in university courses, both at the introductory and more advanced levels. I can think of no other single collection that can compare, and it seems to me that one of the reasons for its strength lies in the collaborative effort between British and Russian scholars, which is essential to a documentary volume of this type. European History Quarterly, Vol. 39(1), 2009 ...this superb work strikes a welcome balance between the usual party and state documents detailing ideological conflict, tactical manoeuvring, and repression and less familiar ones illuminating questions about religion, peasant experience, social protest, and daily life in regions beyond Moscow and Leningrad. The addition of memoirs, diaries and letters is particularly welcome... ... the modest cost of this collection...I highly recommend. Canadian Slavonic Papers, Vol. LI, No. 1 200903

Taschenbuch
From Valois to Bourbon