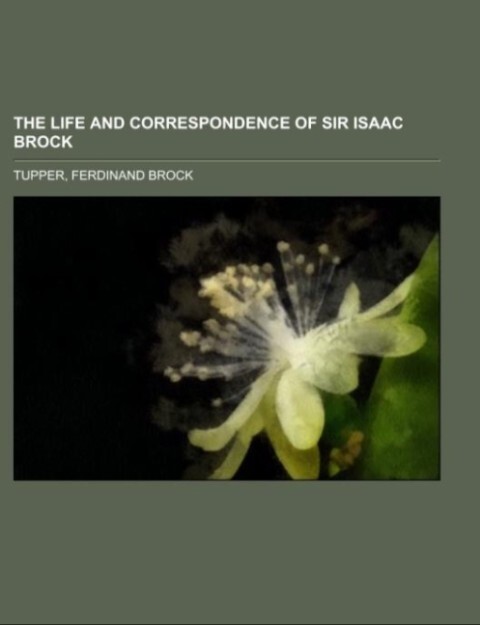 The Life and Correspondence of Sir Isaac Brock

von Ferdinand Brock Tupper
Paperback. Sprache: Englisch.
Taschenbuch
Excerpt: ...of the evil-disposed, and I soon experienced the gratification of receiving voluntary offers of service from that portion of the embodied militia the most easily collected. In the attainment of this important point, gentlemen of the first … weiterlesen
Dieser Artikel ist auch verfügbar als:
Geschenk per Mail versenden
Taschenbuch

Excerpt: ...of the evil-disposed, and I soon experienced the gratification of receiving voluntary offers of service from that portion of the embodied militia the most easily collected. In the attainment of this important point, gentlemen of the first character and influence shewed an example highly creditable to them; and I cannot, on this occasion, avoid mentioning the essential assistance I derived from John M'Donell, Esq., his majesty's attorney-general, who, from the beginning of the war, has honored me with his services as my provincial aide-de-camp. A sufficiency of boats being collected at Long Point for the conveyance of 300 men, the embarkation took place on the 8th instant, and in five days we arrived in safety at Amherstburg. I found that the judicious arrangements which had been adopted immediately upon the arrival of Colonel Proctor, had compelled the enemy to retreat, and take shelter under the guns of his fort: that officer commenced operations by sending strong detachments across the river, with a view of cutting off the enemy's communication with his reserve. This produced two smart skirmishes on the 5th and 9th instant, in which the enemy's loss was considerable, whilst ours amounted to 3 killed and 13 wounded; amongst the latter, I have particularly to regret Captain Muir and Lieutenant Sutherland, of the 41st regiment; the former an officer of great experience, and both ardent in his majesty's service. Batteries had likewise been commenced opposite Fort Detroit, for one 18-pounder, two 12, and two 5¿-inch mortars, all of which opened on the evening of the 15th; (having previously summoned Brigadier-General Hull to surrender;) and although opposed by a well-directed fire from seven 24-pounders, such was their construction, under the able direction of Captain Dixon, of the Royal Engineers, that no injury was sustained from its effect. The force at my disposal being collected in the course of the 15th, in the neighbourhood of Sandwich,...