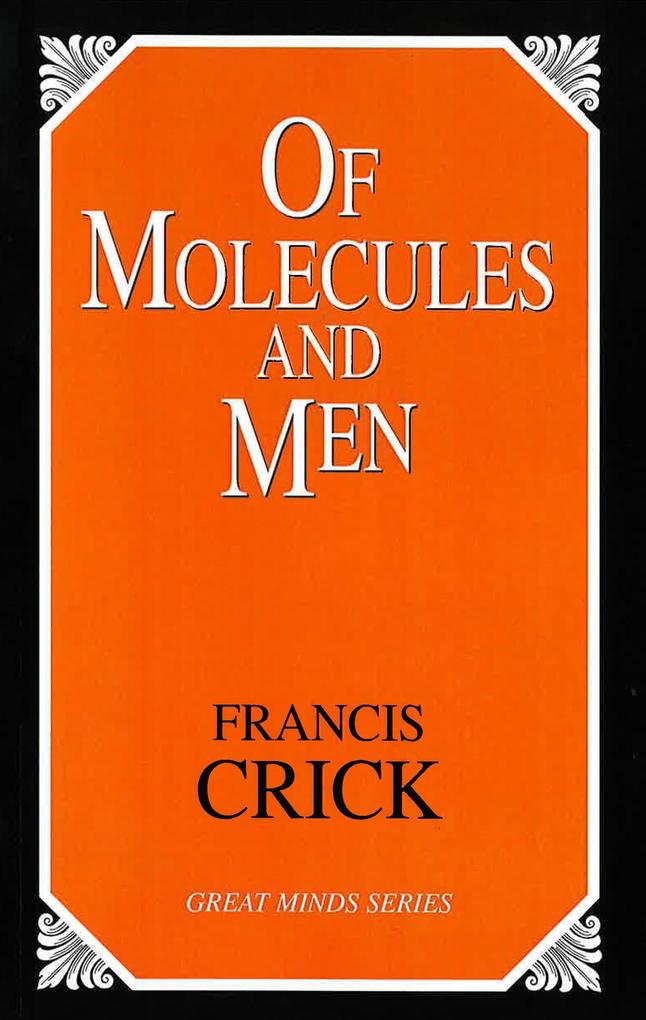 Of Molecules and Men

von Francis Crick
Sprache: Englisch.
Taschenbuch
There is probably no one who has a deeper understanding of life's biochemical basis than Sir Francis Crick. In 1962, he won the Nobel Prize in Medicine, along with J. D. Watson and M. H. F. Wilkins, for breakthrough studies on the molecular structure … weiterlesen
Geschenk per Mail versenden
Taschenbuch

There is probably no one who has a deeper understanding of life's biochemical basis than Sir Francis Crick. In 1962, he won the Nobel Prize in Medicine, along with J. D. Watson and M. H. F. Wilkins, for breakthrough studies on the molecular structure of DNA. Just four years later he published this collection of popular lectures in which he explained the importance of this discovery in layperson's terms and emphasized its wide-reaching implications. Though written forty years ago, this succinct, lucid explication of the scientific facts remains the perfect primer for the lay reader curious about the ongoing biological revolution and is amazingly prescient in light of recent developments.

Beginning with a critique of "vitalism," the notion that an intangible life force beyond the grasp of biology distinguishes living organisms from inanimate things, Crick argues that in all likelihood the complex mechanisms of DNA, RNA, and protein synthesis fully explain the phenomenon of life. While admitting that many details are uncertain and much remains unknown about the origins of life, he nonetheless maintains that chance mutations over time, in conjunction with the law of natural selection, offer the most rational explanation of the evolution of life on earth from inorganic precursors. Although few speak of vitalism today, the controversy that Crick addresses is still with us in the form of intelligent design, which suggests that biochemistry and evolution alone do not sufficiently explain the uniqueness of life.

In his second lecture Crick explores the borderline between the organic and inorganic, presenting an elegantly clear description of DNA's basic structure and function in relation to RNA and myriad enzymes.

In the final lecture, "The Prospect Before Us," he anticipates events and trends that have in fact come to pass in the past four decades: the increasing use of computer technology and robotics in mind-brain research, explorations into right-side vs. left-side uses of the brain, controversies surrounding the existence of the soul, the dead end of ESP investigations, and above all the daunting challenges of explaining consciousness in completely scientific terms.

Of Molecules and Men is a fascinating, still-very-relevant discussion of many crucially important issues in life science.

FRANCIS HARRY COMPTON CRICK was born on June 8, 1916, at Northampton, England. The elder son of Harry and Annie Eliz­abeth Wilkins Crick, he was educated at Northampton Grammar School and Mill Hill School, London. He studied physics at Univer­sity College, London, earning his bachelor's degree in 1937. His pur­suit of a doctorate was interrupted by the outbreak of World War II. Crick worked as a physicist for the British Admiralty during the war, leaving in 1947 to study biology. He earned his doctorate at Caius College, Cambridge University, in 1953.

Crick was a laboratory scientist at Cavendish Laboratory, Cam­bridge University. In 1962 he became director of Cambridge Univer­sity's Molecular Biology Laboratory. From 1977 he was a faculty member at the Salk Institute for Biological Studies in San Diego, and is now a distinguished professor and president emeritus of the insti­tute's Kieckhefer Center for Theoretical Biology. He was a visiting lecturer at the Rockefeller Institute, New York City, and a visiting pro­fessor at Harvard University. In 1959 he was elected a Fellow of the Royal Society.

In 1962 Crick won the Nobel Prize in physiology/medicine, with James D. Watson and Maurice H.F. Wilkins, for studies of the mole­cular structure of DNA. Queen Elizabeth II awarded him the Order of Merit in 1992.

Crick is the author of numerous papers and articles on molecular biology, and four books: Of Molecules and Men (1966), Life Itself: Its Origin and Nature (1981), What Mad Pursuit: A Personal View of Sci­entific Discovery (1988), and The Astonishing Hypothesis: The Scientific Search for the Soul (1994).