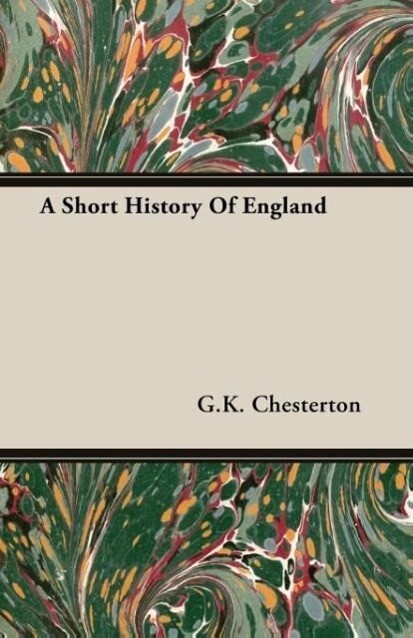 A Short History Of England

12% Rabatt³ sichern mit Gutscheincode: MAI12
​
Many of the earliest books, particularly those dating back to the 1900s and before, are now extremely scarce and increasingly expensive. We are republishing these classic works in affordable, high quality, modern editions, using the original text and … weiterlesen
Geschenk per Mail versenden
Taschenbuch

Many of the earliest books, particularly those dating back to the 1900s and before, are now extremely scarce and increasingly expensive. We are republishing these classic works in affordable, high quality, modern editions, using the original text and artwork.

Gilbert Keith Chesterton, (29 May 1874 - 14 June 1936), was an English writer, poet, philosopher, dramatist, journalist, orator, lay theologian, biographer, and literary and art critic. Chesterton is often referred to as the "prince of paradox".Time magazine has observed of his writing style: "Whenever possible Chesterton made his points with popular sayings, proverbs, allegories-first carefully turning them inside out.
Chesterton is well known for his fictional priest-detective Father Brown,[5] and for his reasoned apologetics. Even some of those who disagree with him have recognised the wide appeal of such works as Orthodoxy and The Everlasting Man.[4][6] Chesterton routinely referred to himself as an "orthodox" Christian, and came to identify this position more and more with Catholicism, eventually converting to Catholicism from High Church Anglicanism. George Bernard Shaw, his "friendly enemy", said of him, "He was a man of colossal genius."[4] Biographers have identified him as a successor to such Victorian authors as Matthew Arnold, Thomas Carlyle, Cardinal John Henry Newman, and John Ruskin.
Chesterton was born in Campden Hill in Kensington, London, the son of Marie Louise, née Grosjean, and Edward Chesterton.[8][9] He was baptised at the age of one month into the Church of England,[10] though his family themselves were irregularly practising Unitarians.[11]According to his autobiography, as a young man Chesterton became fascinated with the occultand, along with his brother Cecil, experimented with Ouija boards.
Chesterton was educated at St Paul's School, then attended the Slade School of Art to become an illustrator. The Slade is a department of University College London, where Chesterton also took classes in literature, but did not complete a degree in either subject.
In September 1895 Chesterton began working for the London publisher Redway, where he remained for just over a year.[14] In October 1896 he moved to the publishing house T. Fisher Unwin,[14] where he remained until 1902. During this period he also undertook his first journalistic work, as a freelance art and literary critic. In 1902 the Daily News gave him a weekly opinion column, followed in 1905 by a weekly column in The Illustrated London News