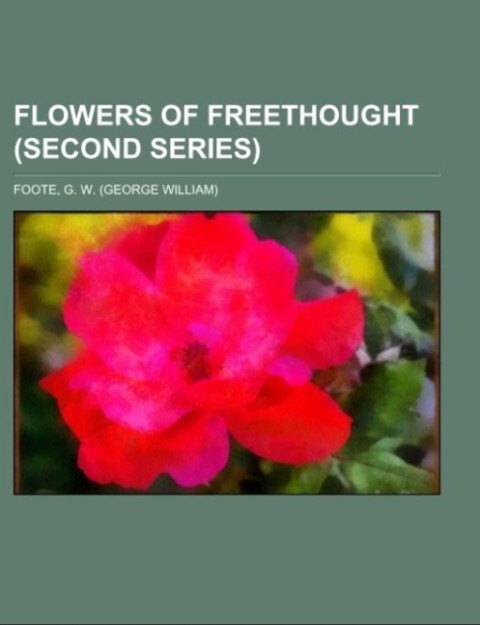 von G. W. Foote
Paperback. Sprache: Englisch.
Taschenbuch
Excerpt: ...were perfectly distracted, and out of their senses." But perhaps the worst stroke of all against Christianity is the following sly one. Folly is said to be acceptable, or at least excusable, to the gods, who "easily pass by the heedless f … weiterlesen
Dieser Artikel ist auch verfügbar als:
Geschenk per Mail versenden
Taschenbuch

Excerpt: ...were perfectly distracted, and out of their senses." But perhaps the worst stroke of all against Christianity is the following sly one. Folly is said to be acceptable, or at least excusable, to the gods, who "easily pass by the heedless failures of fools, while the miscarriages of such as are known to have more wit shall very hardly obtain a pardon." Did space permit we might give several extracts from the Praise of Folly, showing that Erasmus could speed the shafts of his satire at the very essentials of religion, such as prayer and providence. Were he living now, we may be sure that he would be in the van of the Army of Liberation. Living when he did, he performed a high and useful task. His keen, bright sword played havoc with much superstition and imposture. He made it more difficult for the pious wranglers over what Carlyle would call "inconceivable incredibilities" to practise their holy profession. Certainly he earned, and more than earned, the praise of Pope. At length Erasmus, that great injur'd name (The glory of the priesthood and the shame!) Stemm'd the wild torrent of a barbarous age, And drove those holy Vandals off the stage. Erasmus was, in fact, the precursor of Voltaire. Physically, as well as intellectually, these two great men bore a certain resemblance. A glance at the strong, shrewd face of Erasmus is enough to show that he was not a man to be easily imposed upon; and the square chin, and firm mouth, bespeak a determination, which, if it did not run to martyrdom, was sufficient to carry its possessor through hardship and difficulty in the advocacy of his ideals. Rome, says, the proverb, was not built in a day; and Christianity was not built in a century. It took hundreds of years to complete, as it is taking hundreds of years to dissolve. For this reason it is a very complicated structure. There is something in it for all sorts of taste. Those who like metaphysics will find it in Paul's epistles, and in such dogmas as that of...