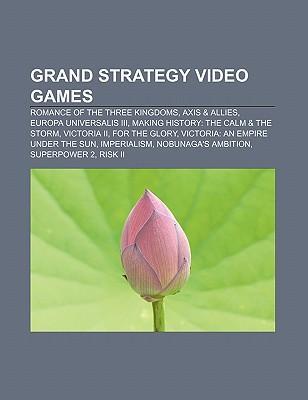 Source: Wikipedia. Pages: 28. Chapters: Romance of the Three Kingdoms, Axis & Allies, Europa Universalis III, Making History: The Calm & The Storm, Victoria II, For the Glory, Victoria: An Empire Under the Sun, Imperialism, Nobunaga's Ambition, SuperPower 2, Risk II, Romance of the Three Kingdoms XI, Chronology of grand strategy video games, Supreme Ruler 2020, Strategic Command 2: Blitzkrieg, Generation of Chaos, Crusader Kings, Europa Universalis: Rome, Romance of the Three Kingdoms II, Romance of the Three Kingdoms IX, Romance of the Three Kingdoms IV: Wall of Fire, World War 2: Time of Wrath, Rise of Prussia, Romance of the Three Kingdoms III: Dragon of Destiny, World Empire, Great Invasions, Strategic Command WWII Pacific Theater, Storm Over the Pacific, Birth of America, Europa Universalis: Crown of the North, Ageod's American Civil War, Romance of the Three Kingdoms VIII, Sangokushi V, Storm Across Europe, Romance of the Three Kingdoms VI: Awakening of the Dragon, World War One, Supreme Ruler 2010, Clash of Steel, Strategic Command WWII Global Conflict, Storm: Frontline Nation, Two Thrones. Excerpt: Axis & Allies (abbreviated to A&A), also called Axis & Allies RTS, is a real-time strategy World War II computer game developed by TimeGate Studios and published by Atari. The game was released on April 2, 2004. It is based on the popular board game Axis & Allies from Milton Bradley and also on TimeGate's Kohan series. It is set in the years just after Japan and the United States had entered into the war. The game incorporates two gameplay modes: real-time and turn-based modes. However, turn-based gameplay is only present in WWII mode, and thus gameplay is mainly focused on the real-time strategy genre. Axis & Allies allows the player to assume the role of a military general of one of the five superpowers of World War II: the United States, Great Britain, Germany, Russia, and Japan. The five nations have military units corresponding to that of their nationality, and each general of the five nations have unique special operations, such as carpet bombing, deploying a secret agent, or using propaganda warfare. Each nationality also has technology such as snipers for Russia, flamethrower tanks for Great Britain, and king tiger tanks for Germans. The primary objective of gameplay is to destroy the opposing enemy military forces, although some campaigns and maps will require other objectives to be completed first, such as capturing certain cities or defending a specific area, in order to achieve victory. Axis & Allies also has a "City Control" percentage toggle option that can be enabled, in which the winner of the battle goes to the first side/team to capture a set percentage of cities on the map. Gameplay supports up to eight players in a single battle in both singleplayer and multiplayer. Axis & Allies focuses on the production of three major resources: money, ammo, and oil. Money is obtained from a constant flow of revenue received from a Corps HQ', Division HQ's, and cities. Unlike money, both the resources of ammo and oil can be obtained from just about any building