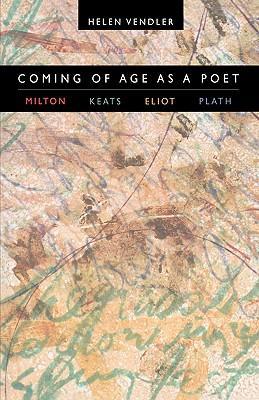 Coming of Age as a Poet

von Helen Vendler
Milton, Keats, Eliot, Plath. 4 halftones. Sprache: Englisch.
Taschenbuch
precision, authority, and grace, Vendler helps us to appreciate anew the conception and the practice of poetry, and to observe at first hand the living organism that breathes through the words of a great poem.

Titel: Coming of Age as a Poet
Autor/en: Helen Vendler

precision, authority, and grace, Vendler helps us to appreciate anew the conception and the practice of poetry, and to observe at first hand the living organism that breathes through the words of a great poem.

In Coming of Age as a Poet, Vendler...chooses one breakthrough poem by each of four poets--Milton, Keats, Eliot, and Plath. Through close readings of their structure, imagery, and scansion, she shows how these poems mark each poet's mastery of a unique voice...The clarity and expert analysis of all four poems could engage even a casual reader, while the breadth of scholarship and unique interpretations will appeal to more experienced poetry readers. Vendler's work is highly recommended. -- Vivian Reed Library Journal 20030101 Where does a poet's voice come from and of what is it forged? There's a question to bring out bootless reductionism if ever there was one, yet Helen Vendler explores it magnificently in its complexity and nuance in Coming of Age as a Poet. -- Katherine A. Powers Boston Sunday Globe 20030323 Reading a Vendler essay is like coming home to the cave; like entering the mind of the poet. In Coming of Age as a Poet, a collection of four essays, Vendler looks at the point in the lives of four poets...when they came into their own maturity as poets, found their discourses, the styles and the voices that would make them immortal...Vendler shows them on their vulnerable ascents to greatness. -- Susan Salter Reynolds Los Angeles Times Book Review 20030330 A clear but subtle account of the struggles, the rites of passage, undergone by four poets, while still in their 20s, negotiating with tradition in order to find their style and attain their majority--to become, in fact, major poets...Each chapter becomes a short story, a thrillingly compressed account of the vicissitudes of genius...It is a pleasure to be guided by [Vendler] into the poet's workshop--she is so good at making poetry matter, at opening up the interest of passages one had dully taken for granted. -- Philip Horne Guardian Though modest in size, Coming of Age contains numerous original insights into the creative process, especially into that formative period in which a poet finds his or her technique, style, and voice. -- D. D. Kummings Choice 20030901 Helen Vendler begins her brief study with a persuasive and delightful piece on the young Milton...[She] is brilliant on Keat's comparatively slow but sure practicing on the Petrarchan model...She is equally good, by contrast, on the gradual evolution of Eliot's 'The Lovesong of J. Alfred Prufrock'...[This book is] full of perceptions and rewards that send one scurrying back to the text. -- John Bayley New York Review of Books 20031120 [Vendler's] attention to the psychological and aesthetic unraveling of the poet's calling turns the microscopic into the majestic. -- Jacques Khalip Boston Review 20031001 Using Milton, Keats, Eliot and Path as her case studies, Ms. Vendler 'consider[s] the work a young poet has to have done before writing his or her first "perfect poem"--the poem which first wholly succeeds in embodying a coherent personal style.' This is a bold claim and a challenging book, but Ms. Vendler succeeds brilliantly in keeping us hooked. By the end we are better readers. -- Tom Mayo Dallas Morning News 20031221 [Vendler] has offered up a brief but profound inspiration to any reader willing to take the time to move slowly, with curiosity and attention, through her investigation of four cases of great poetry. -- Len Edgerly Bloomsbury Review 20040101 As to books about poetry, you could hardly do better than Coming of Age as a Poet by superb U.S. critic Helen Vendler, in which she illuminates the first perfect poems by John Milton, John Keats, T. S. Eliot and Sylvia Plath. If in doubt about your critical criteria, read Vendler. -- Barry Hill The Weekend Australian 20040214 Helen Vendler is an invaluable presence in current literary studies because she knows that poems matter less for their thought than for their thinking--less, that is, for the ideological stances, usually familiar, that they adopt than for the processes of thinking and feeling and reacting that they re-create in us...She knows that "it is the writing that gives the theme life", and that "a writer's true 'vision' lies in the implications of his or her style." Rather than reducing poems to grist for the dark mills of ideology or theory, or getting the better of them by showing what she can do with them, she seeks to "e-valuate" them by drawing out their human significance. The case presented in Coming of Age as a Poet is straightforward: she sets the first "perfect" poem by each of her four poets--"the poem which first wholly succeeds in embodying a coherent personal style"--against their earlier attempts. -- John Creaser Milton Quarterly This succinct but wide-ranging book, which began life as the James Murray Brown Lectures at the University of Aberdeen, looks to the early work of a number of poets in order to understand their individual quests for a personal style, for a voice or voices, and for a place in the world. Year's Work in English Studies 20050101