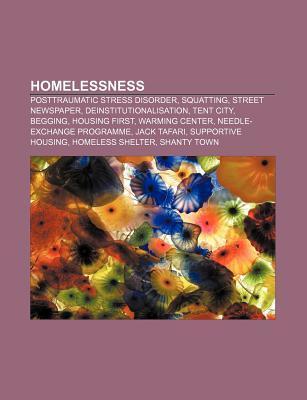 Source: Wikipedia. Pages: 70. Chapters: Posttraumatic stress disorder, Squatting, Street newspaper, Deinstitutionalisation, Tent city, Begging, Housing First, Warming center, Needle-exchange programme, Jack Tafari, Supportive housing, Homeless shelter, Shanty town, Anti-homelessness legislation, Dreams for Kids, Waif, Displaced person, Black triangle, Sit-lie ordinance, Runaway, Net cafe refugee, Itinerant, Discrimination against the homeless, Halfway house, Vagrancy Act 1824, Squeegee man, Homeless Vulnerability Index, Family Emergency Shelter Coalition, Pavement dwellers, Homeless dumping, No fixed abode, Four penny coffin, Kotjebi, Penny sit-up, Homeless ministry, Bergie, Antwone Taulton, Win-3 Habitat, Hygiene program, Western Regional Advocacy Project, Community stew, Crisis accommodation. Excerpt: Homelessness categorizes the condition of people without a regular dwelling. They are unable or unwilling to acquire and maintain regular, safe, and adequate housing, or lack "fixed, regular, and adequate night-time residence." The legal definition of "homeless" varies from country to country, or among different entities or institutions in the same country or region. The term homeless may also include people whose primary night-time residence is in a homeless shelter, a warming center, a domestic violence shelter or other ad hoc housing situation. Government homeless enumeration studies also include persons who sleep in a public or private place not designed for use as a regular sleeping accommodation for human beings. The "unsheltered" are that segment of the homeless who do not have ordinary lawful access to buildings in which to sleep. Such persons frequently prefer the term "houseless" to the term "homeless". Others may use the term street people which does not fully encompass all unsheltered in that many such persons do not spend their time on urban "street" environments, and to the contrary shun such locales and prefer to convert unoccupied buildings, or to inhabit mountains or, more often, lowland meadows, creeks and beaches A portion of homeless persons are generally in transit, but there is no generally accepted terminology to describe them; some nomenclature is frequently associated with derogatory connotations, and thus the professional and vernacular lingo to describe these persons is both evolving and not lacking in controversy. Much of the concern stems from the European situation, where "homeless" persons of Roma, Sinti and other ethnic descent have rejected the term "gypsy". Other terms which some use regarding in-transit persons are: transient, vagabond, tramp or "railroad tramp". Occasionally these terms are interchanged with terms not necessarily implying that the person is a traveler, i.e. hobo. The term "bum" is used for persons lacking a work e