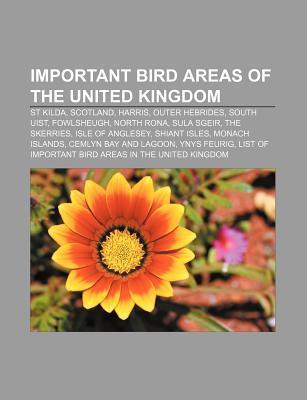 Source: Wikipedia. Pages: 25. Chapters: St Kilda, Scotland, Harris, Outer Hebrides, South Uist, Fowlsheugh, North Rona, Sula Sgeir, The Skerries, Isle of Anglesey, Shiant Isles, Monach Islands, Cemlyn Bay and lagoon, Ynys Feurig, List of Important Bird Areas in the United Kingdom. Excerpt: Overview of Village BaySt Kilda (Scottish Gaelic: ) is an isolated archipelago 64 kilometres (40 mi) west-northwest of North Uist in the North Atlantic Ocean. It contains the westernmost islands of the Outer Hebrides of Scotland. The largest island is Hirta, whose sea cliffs are the highest in the United Kingdom. The islands are administratively a part of the Comhairle nan Eilean Siar local authority area. St Kilda was permanently inhabited for at least two millennia, its population probably never exceeding 180 (and certainly no more than 100 after 1851). The entire population was evacuated from Hirta (the only inhabited island) in 1930. Currently, the only year-round residents are defence personnel although a variety of conservation workers, volunteers and scientists spend time there in the summer months. The origin of the name St Kilda is a matter of conjecture. The islands' human heritage includes numerous unique architectural features from the historic and prehistoric periods, although the earliest written records of island life date from the Late Middle Ages. The medieval village on Hirta was rebuilt in the 19th century, but the influences of religious zeal, illnesses brought by increased external contacts through tourism, and the First World War all contributed to the island's evacuation in 1930. The story of St Kilda has attracted artistic interpretations, including an opera. The entire archipelago is owned by the National Trust for Scotland. It became one of Scotland's five World Heritage Sites in 1986 and is one of the few in the world to hold joint status for its natural and cultural qualities. Two different early sheep types have survived on these remote islands, the Soay, a Neolithic type, and the Boreray, an Iron Age type. The islands are a breeding ground for many important seabird species including Northern Gannets, Atlantic Puffins, and Northern Fulmars. The St Kilda Wren and St Kilda Field Mouse are endemic subspecies. Parties of volunteers work on