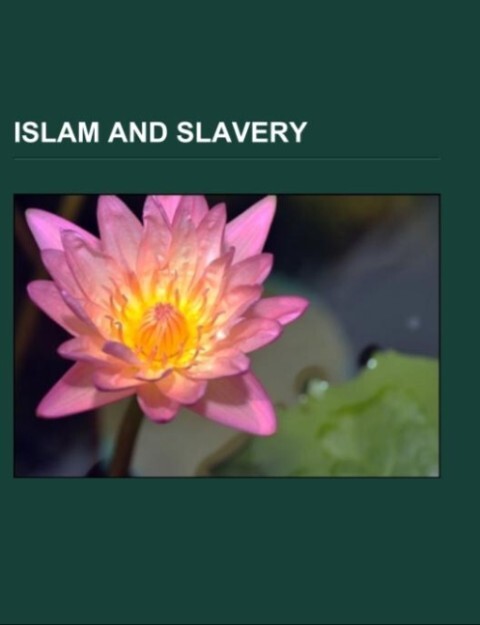 Source: Wikipedia. Pages: 40. Chapters: Slaves of the Muslim world, Mamluk, Arab slave trade, Shajar al-Durr, Al-Khazini, Ma malakat aymanukum, Zanj Rebellion, Qutb-ud-din Aibak, Roxelana, Mukataba, Narjis, Muhammad and slavery, Ammar ibn Yasir, Ammaar Bin Yassir Al-Ansi, Ma malakat aymanukum and sex, Maria al-Qibtiyya, Yaqut al-Hamawi, Saqaliba, Salim Mawla Abu-Hudhayfah, Race and Slavery in the Middle East, Tidiane N'Diaye, Anushtigin Gharchai, Sumayyah bint Khayyat, Murad Bey, Masoud, Al-Nahdiah, Harithah bint al-Muammil, Al-Khayzuran, Sirin, Lubaynah, Umm Ubays, Abu Fuhayra, Khawand Toghay. Excerpt: Islamic views on slavery first developed out of the slavery practices of pre-Islamic Arabia. During the wars between different states/tribes in various parts of the world, the prisoners/captives were either killed or made slaves. The Islamic prophet Muhammad and many of his companions reformed the already existing system of slavery by giving the captives / POWs in private custody of Muslim soldiers instead of public/state custody as prevalent in the modern world for there had been no official prisons available in the newly created Muslim state in Madina headed by Muhammad. In Islamic law the topic of slavery is covered at great length. The Qur'an (the holy book) and the hadith (the sayings of Muhammad) see slavery as an exceptional condition that can be entered into under certain limited circumstances. Only children of slaves or non-Muslim prisoners of war could become slaves, never a freeborn Muslim. They also consider manumission of a slave to be one of many meritorious deeds available for the expiation of sins. According to Sharia, slaves are considered human beings and possessed of some rights on the basis of their humanity. In addition, a Muslim slave is equal to a Muslim freeman in religious issues and superior to the free non-Muslim. In practice, slaves played various social and economic roles from Emir to worker. Slaves were widely employed in irrigation, mining, pastoralism and the army. Even some rulers relied on military and administrative slaves to such a degree that they seized power. However, people do not always treat with slaves in accordance with Islamic law. In some cases, the situation has been so harsh as to have led to uprisings such as Zanj Rebellion. However, this was usually the exception rather than the norm, as the vast majority of labour in the medieval Islamic world consisted of free, paid labour. For a variety of reasons, internal growth of the slave population was not enough to fulfill the demand in Muslim society. This resulted in mass