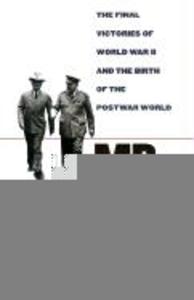 The Final Victories of World War II and the Birth of the Postwar World.
Illustrations.
Sprache: Englisch.

This is the first paperback edition of a book the New York Times called "a pitch-perfect rendering" of a critical period in American and world history. Robert Moskin's engaging and readable volume chronicles the first five months of Harry Truman's presidency, encompassing not only the destruction and defeat of the Axis Powers in Germany and Japan, but also the dropping of the first atomic bombs, the birth of the United Nations, the death of colonialism, and the beginning of the Cold War.
From the summons to FDR's deathbed early on the morning of April 2, 1945, through the Japanese surrender on the deck of the USS Missouri, Moskin tracks this unexpected president through some of the most uncertain and trying times in our nation's life. A former Missouri farmer and county commissioner known by his trademark bow tie and steel-rimmed glasses, Truman had little experience in international affairs, having become vice president via a purely political compromise only five months earlier.
Despite his inexperience, he did not hesitate before enormous challenges that loomed over his first administration. He ordered the dropping of the Hiroshima and Nagasaki atomic bombs, refused Churchill's repeated request that he leave American troops in the Russian occupation zone of Germany, cut off supplies to de Gaulle's French army, and insisted that Japan surrender "unconditionally." And at the famous meeting with Stalin and Churchill at Potsdam, he more than held his own.
By the end of those first five months, Truman had transformed himself into a confident leader with a tenacious and unflinching commitment to American ideals in the face of new global challenges.

J. Robert Moskin is the author of six previous books including The U.S. Marine Corps Story, Among Lions, and Morality in America. A former foreign editor for Look magazine and senior editor for Collier's, he served with the U.S. Army in the Southwest Pacific during World War II and currently lives in New York City and Tyringham, Massachusetts.