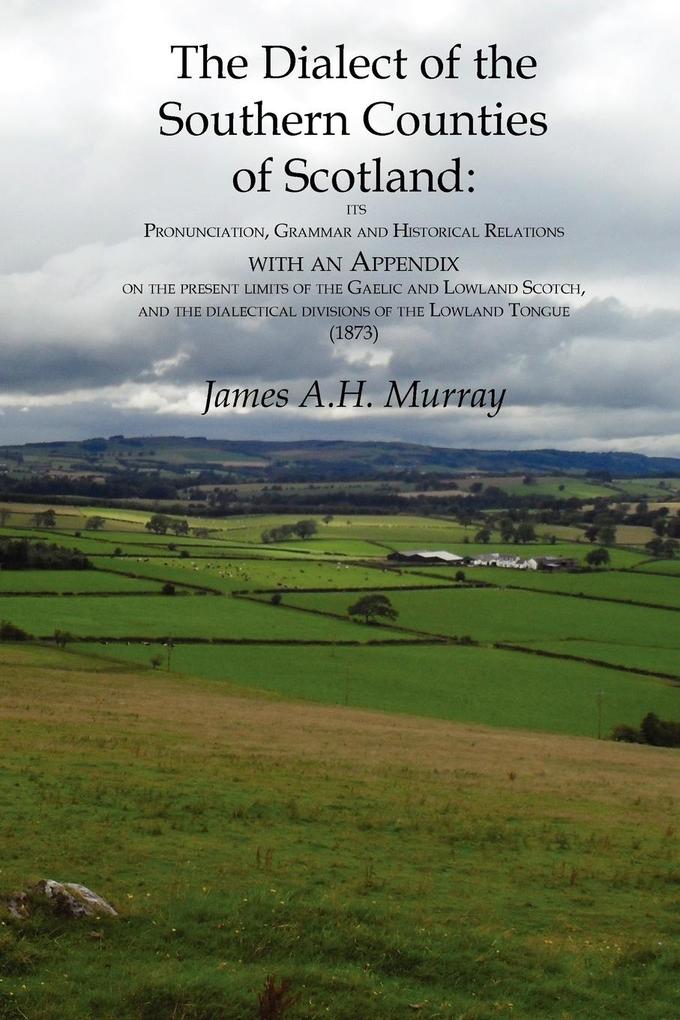 Dialect of the Southern Counties of Scotland: its Pronunciation, Grammar and Historical Relations, with an…

von James A. H. Murray
Sprache: Englisch.
Taschenbuch
The local dialects are passing away: along with them disappears the light which they are able to shed upon so many points in the history of the national tongue that supersedes them, and the contributions which they, more than artificially trimmed Lit … weiterlesen
Geschenk per Mail versenden
Jetzt nur

Titel: Dialect of the Southern Counties of Scotland: its Pronunciation, Grammar and Historical Relations, with an Appendix on the present limits of the Gaeli
Autor/en: James A. H. Murray

The local dialects are passing away: along with them disappears the light which they are able to shed upon so many points in the history of the national tongue that supersedes them, and the contributions which they, more than artificially trimmed Literary idioms, are able to make to the Science of Language, whether in regard to the course of phonetic changes, or the spontaneous growth of natural grammar. They are passing away: even where not utterly trampled under foot by the encroaching language of literature and education, they are corrupted and arrested by its all-pervading influence, and in the same degree rendered valueless as witnesses of the usages of the past and the natural tendencies of the present.
These pages attempt to photograph the leading features of one of the least-altered of these dialects, that of the Southern Counties of Scotland, and, with this as a basis, to illustrate the characteristics of that group of dialects descended from the old 14th century "Inglis of the Northin lede," which under the names of Northern English and Lowland Scotch, still prevail in more or less of their original integrity from the Yorkshire dales, to the Pentland Firth. Farthest removed from Celtic contact, and from the influence of the literary English, the Northern tongue has in the south of Scotland retained more of its old forms than elsewhere, and so far as concerns its vocabulary, and grammatical structure, affords almost a living specimen of the racy idiom in which Hampole and Barbour, at opposite extremes of the Northern-Speech-land, wrote five centuries ago. Its pronunciation has of course changed since then, but with a consistent course and definite direction; and its system of sounds is still of interest, showing in actual operation, the processes by which the old guttural -gh, -ch, has sunk into the -f and -w of modern English, and that by which the long I and u in so many of the Teutonic tongues have from simple vowels, become the diphthongs in English mine, house, German mein, ham, Dutch mijn, huis.
As the history of the Lowland Scotch division of the Northern tongue, and its relations to the adjacent dialects in England, have been the subject of much wild theory and but little research in the direction whence light was to be obtained, the Historical Introduction has been made especially full and complete.
The spelling employed to represent Scottish sounds will probably be objected to in many points by Scotchmen, who would prefer our shoon, to oor schuin. At the same time, no student of a language can be insensible to the associations of the "historical spelling" which has grown up along with its spoken forms, nor will he willingly discard the drapery with which it was clothed in earlier times, and which in so many cases is our only guide to the living organism which once breathed within. Still in dealing with a living dialect of the 19th century, one cannot always do justice to its own form and spirit by confining it to the winding sheet which decently enough envelopes the dead language of the 16th. If the spelling used, with help of the key and account of the pronunciation, succeed in giving an idea of the living words to those who never heard them spoken, it will fulfil its purpose. Of course in quoting the ancient language, where the spelling is the only guide we have to the words, care has been taken faithfully to preserve their original written forms; the quotations are, wherever possible, from the editions of the Early English Text or Philological Society, or of such conscientious editors as Dr, David Laing, and in most other cases from the original MSS. or editions. Only in cases of importance are references to the actual passages given; where the point in question was the ordinary usage to be found on every page of a work, it seemed unnecessary to give reference to page and line. - from the Preface.

Schreiben Sie eine Bewertung für: Dialect of the Southern Counties of Scotland: its Pronunciation, Grammar and Historical Relations, with an Appendix on the present limits of the Gaeli