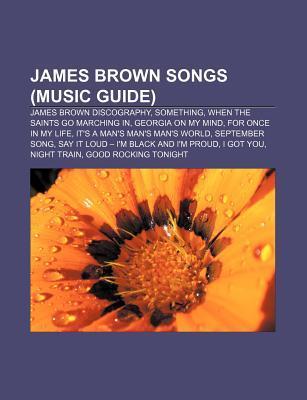 
James Brown discography, Something, When the Saints Go Marching In, Georgia on My Mind, For Once in My Life, It's a Man's Man's Man's World, September Song, Say It Loud - I'm Black and I'm Proud, I Got You, Night Train.
Paperback.
Sprache: Englisch.

Source: Wikipedia. Commentary (music and lyrics not included). Pages: 42. Chapters: James Brown discography, Something, When the Saints Go Marching In, Georgia on My Mind, For Once in My Life, It's a Man's Man's Man's World, September Song, Say It Loud - I'm Black and I'm Proud, I Got You, Night Train, Good Rocking Tonight, Cold Sweat, Funky Drummer, Get Up Sex Machine, The Payback, These Foolish Things, Caldonia, Lost Someone, Your Cheatin' Heart, That's My Desire, Think, Papa's Got a Brand New Bag, Night Time Is the Right Time, Please, Please, Please, Mother Popcorn, Living in America, Call It Stormy Monday, Kansas City, Bewildered, Hot Pants, (Do the) Mashed Potatoes, Try Me, That Lucky Old Sun, Super Bad, Out of Sight, Prisoner of Love, Doing It to Death, Soul Power, Get Up Offa That Thing, Unity, Talkin' Loud and Sayin' Nothing, Give It Up or Turnit a Loose, Have Mercy Baby, Sweet Soul Music, The Grunt, Make It Funky, I Got the Feelin', Papa Don't Take No Mess, Get on the Good Foot, I Loves You Porgy, Funky President, If I Ruled the World, Ain't Nobody Here But Us Chickens, Licking Stick - Licking Stick, Oh Baby Don't You Weep, I Don't Mind, What Kind of Fool Am I?, Shout and Shimmy, I'll Go Crazy, It's Magic, My Thang, Hot (I Need to Be Loved, Loved, Loved). Excerpt: This is a discography for the "Godfather of Soul", James Brown. Listed below are the charting singles James Brown released on the Federal record label between 1956 and 1960. Listed below are the charting singles James Brown released on the King record label between 1960 and 1971. Listed below are the charting James Brown singles issued on the Smash label between 1964 and 1967. Listed below are the charting James Brown singles issued on the Polydor label between 1971 and 1981. The list of charting singles below are the ones James Brown released on various labels including the Scotti Bros. Records label among others. "Something" is a song by The Beatles, written by lead guitarist George Harrison in 1969. It was featured on the album Abbey Road, and was also the first song written by Harrison to appear on the A-side of a Beatles' single. It was one of the first Beatles' singles to contain tracks already available on a long playing (LP) album, with both "Something" and "Come Together" having appeared on Abbey Road. "Something" was the only Harrison composition to top the American charts while he was in the Beatles. John Lennon and Paul McCartney, the band's principal songwriters, both praised "Something" as among the best songs Harrison had written, or the group had to offer. As well as critical acclaim, the single achieved commercial success, topping the Billboard charts in the United States, and entering the top 10 in the United Kingdom. The song has been covered by over 150 artists including Elvis Presley, Shirley Bassey, Frank Sinatra, Tony Bennett, James Brown, Julio Iglesias, The Miracles, Eric Clapton, and Joe Cocker, and is the second-most covered Beatles' song after "Yesterday". Harrison is quoted as saying that his favourite cover of the song was that of James Brown's, keeping Brown's version in his personal jukebox. During the 1968 recording sessions for The Beatles (also referred to as the White Album), Harrison began working on a song that eventually b