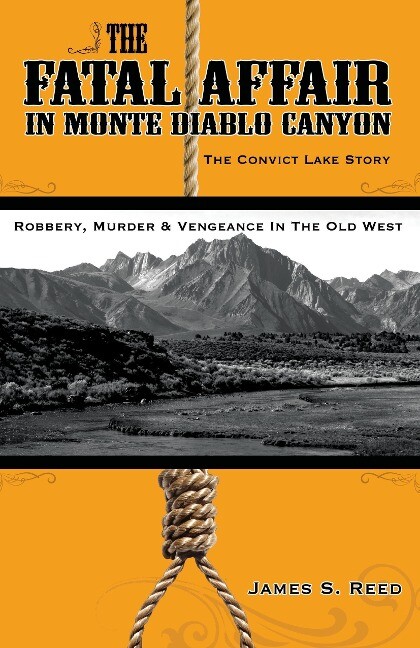 The Fatal Affair in Monte Diablo Canyon: The Convict Lake Story-Robbery, Murder and Vengeance in the Old West

von James S. Reed
Sprache: Englisch.
Taschenbuch
In 1866 a gang from Indiana led by men named Reno and Sparks pulled off the first train robbery in history. Four years later in a copy-cat crime, the Central Pacific Railroad's Overland Express was robbed of over $41,000 in gold coin by a bunch of pe … weiterlesen
Geschenk per Mail versenden
Taschenbuch

In 1866 a gang from Indiana led by men named Reno and Sparks pulled off the first train robbery in history. Four years later in a copy-cat crime, the Central Pacific Railroad's Overland Express was robbed of over $41,000 in gold coin by a bunch of petty criminals. Strangely enough, the latter robbery took place near the Nevada cities of Reno and Sparks. It was the West's first train robbery and the first of the new transcontinental railroad. The robbers were quickly caught, tried, and imprisoned, thanks to the determination of a lawman whose dogged perseverance is mindful of Inspector Javert, Jean Valjean's pursuer in Victor Hugo's Les Miserables.


A year later the robbers instigated the largest prison escape in the country's history, as twenty-nine inmates breached the gates and scattered. Two men were murdered by rioting convicts. Several others, including Nevada's lieutenant governor, were seriously wounded in the battle at the state prison in Carson City.


Six of the convicts headed south and along the way killed a young mail rider from the mining camp of Aurora, Nevada, which not long before had been the home of the young Samuel Clemens. The murder was so gruesome that it put the town on the warpath. The convicts holed up in a canyon in the Eastern Sierra near present day Mammoth Lakes, California, some one hundred fifty miles south of Carson City. Using Henry rifles stolen from the prison armory, they outgunned a posse out to take them dead or alive. Two more men were killed, including a popular merchant and Wells Fargo agent.


An enraged citizenry from two states would ignore the law in wreaking swift and terrible retribution.


The story is told in the context of its time: the construction of the Central Pacific over the Sierras, Reno's birth as a railroad town and its emergence as Nevada's then largest city, the violence of life in the mining camps, the tribulations of imprisoned men, and the preference for vigilantism over tiresome judicial procedures. In some chapters a modified historical fiction approach is used to give some immediacy to the lives-and anxieties-of the desperate men involved, two of whom were murderous psychopaths.


The title of the book-"The Fatal Affair in Monte Diablo Canyon"-is taken from a September 30, 1871, article in the Inyo Independent, the newspaper of record in nearby Inyo County. The article describes the gun battle in the canyon and its aftermath. The peak, then called Monte Diablo, is now Mount Morrison, named in memory of the Wells Fargo agent killed in the battle. The lake in the canyon is now Convict Lake, a well known Sierra destination.