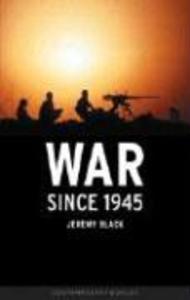 Most writing on modern warfare begins with the French Revolutionary Wars and continues through World Wars I and II, giving post-1945 conflicts only a cursory glance through the lens of Cold War politics. Distinguished military historian Jeremy Black corrects that imbalance with War since 1945, a comprehensive look at the many large- and small-scale wars fought around the world in the past sixty years.Black argues strenuously that, in order fully to understand recent warfare, we must discard the Cold War narrative that has until now framed the majority of historical inquiry. By treating conflicts--especially those in and between developing nations--on their own terms, he is able to bring proper attention to the wide varieties of force structures, methods, goals, and military cultures that have been employed in post-World War II battles. Rather than recapitulate the familiar assessments that consider improvements in weaponry or increases in the size of armies without adequately weighing the wider context of their uses in specific wars, Black presents an account of warfare that focuses on the actual tasks the military is ordered to undertake. His global coverage of warfare is unparalleled, and his insistence on the centrality of developing nations to this period of military history brings new knowledge to bear on understudied aspects of recent history. Black brings the book up to date with considerations of the current "war on terror" and the U.S.-led war in Iraq. Timely and accessible, War since 1945 will be essential to anyone who wants to understand the state of warfare in the present day.

One of Britain's leading military historians, Jeremy Black is Professor of History at the University of Exeter. His many books include Maps and Politics (Reaktion, 1997), Why Wars Happen (Reaktion, 1999) and Britain since the Seventies (Reaktion, 2003).

This book is not intended to provide detailed accounts of any single conflict. Its aim is to argue for a broader view of warfare and to back this with examples from throughout the postwar era ... useful as a broad introduction to or overview of the full range of post-1945 warfare ... it will be read with interest by those engaged in military history or strategic studies who might relish a fresh approach to their subject. Military History Perhaps the most significant contribution ... is the attention Mr. Black pays to the many conflicts that have not involved the Great Powers. These have received too little attention over the years, yet they are extremely instructive on the role of culture and ethnicity in warfare. And they provide a fresh context for understanding the nature and causes of war in the 20th and 21st centuries. New York Sun