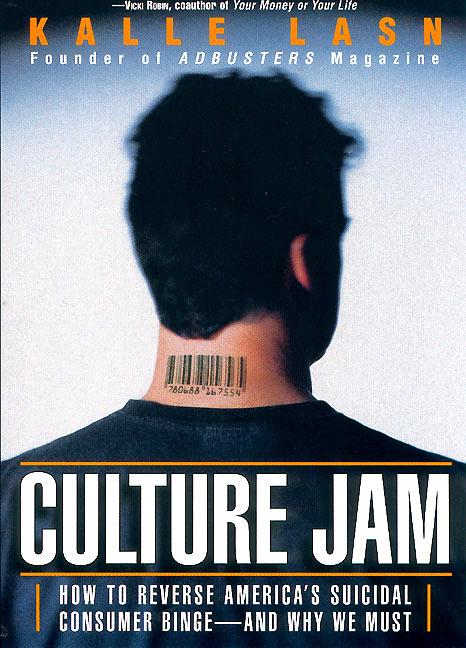 Culture Jam: How to Reverse America's Suicidal Consumer Binge--Any Why We Must

Titel: Culture Jam: How to Reverse America's Suicidal Consumer Binge--Any Why We Must
Autor/en: Kalle Lasn

America is no longer a country but a multimillion-dollar brand, says Kalle Lasn and his fellow "culture jammers". The founder of Adbusters magazine, Lasn aims to stop the branding of America by changing the way information flows; the way institutions wield power; the way television stations are run; and the way the food, fashion, automobile, sports, music, and culture industries set agendas. With a courageous and compelling voice, Lasn deconstructs the advertising culture and our fixation on icons and brand names. And he shows how to organize resistance against the power trust that manages the brands by "uncooling" consumer items, by "dermarketing" fashions and celebrities, and by breaking the "media trance" of our TV-addicted age.
A powerful manifesto by a leading media activist, Culture Jam lays the foundations for the most significant social movement of the early twenty-first century -- a movement that can change the world and the way we think and live.

Featured in the PBS documentary Affluenza, Kalle Lasn, whose documentaries have been broadcast on PBS, CBC, and around the world, has won 15 international awards, and has been profiled in Time. As publisher of Adbusters magazine and founder of Media Foundation and Powershift Advertising Agency, Lasn has launched social marketing campaigns like Buy Nothing Day and TV Turnoff Week. He and his wife, Masako Tominaga, make their home in Vancouver, Canada.

"A brilliant and essential manual for our species."--David C. Korten, author of "The Post-Corporate World: Life After Capitalism"This is the culture jammer's call to reverse the suicidal consumer binges while there is still time."--George Gerbner, founder of the Cultural Environment Movement"Kalle Lasn is callenging the mental stranglehold of advertising culture."--Polly Ghazi, "Resurgence magazine