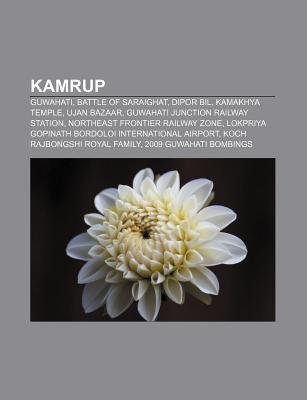 Source: Wikipedia. Pages: 32. Chapters: Guwahati, Battle of Saraighat, Dipor Bil, Kamakhya Temple, Ujan Bazaar, Guwahati Junction Railway Station, Northeast Frontier Railway Zone, Lokpriya Gopinath Bordoloi International Airport, Koch Rajbongshi Royal Family, 2009 Guwahati bombings, Gauhati High Court, Lalganesh, Guwahati Stock Exchange, Rangia, Uma Nanda Temple, Gaisal train disaster, Msonic, Beltola, Dispur, Hajo, Sualkuchi, Guwahati Refinery, North Guwahati, Sukreswar Temple, Forum for Sankaradeva Studies, Palasbari, Jatia, Panbazar, Noonmati, Chandrapur Bagicha, Bamun Sualkuchi, Kochpara, Kamrup Metropolitan district, Dharapur, Itakhuli, Barak Valley Express, Saraighat bridge, Bhetapara, Guwahati Metropolitan Development Authority, Indira Gandhi Athletic Stadium, Guwahati Tea Auction Centre, Polton Bozaar, Guwahati, Rudreswar Temple, Guwahati Municipal Corporation, Raj Bhavan. Excerpt: Guwahati (Assamese:, spelled as Guwahati - with diacritics) formerly known as Gauhati is a metropolitian city in eastern India, with a population of 818,809 (2001 census). It is the largest city in the North-East Region of India and the second metropolitian in Eastern India after Kolkata. It is also considered as one of the largest cities of eastern India. It is said to be the "Gateway" of the North-east Region. Dispur, the capital of the Indian state of Assam, is located within the city. Guwahati is one of the most rapidly growing cities in India; during the past few decades it has experienced expansion and also a steep rise in population. According to a survey done by a UK media outlet, Guwahati is among the 100 fastest growing cities of the world, and is the 5th fastest growing among Indian cities. The city is situated between the southern bank of the Brahmaputra river and the foothills of the Shillong plateau, with LGB International Airport to the west, and the town of Narengi to the east. The city is gradually being expanded as North Guwahati to the northern bank of the Brahmaputra. The Guwahati Municipal Corporation, the city's local government, administers an area of 216 km², while the Guwahati Metropolitan Development Authority, the planning and development administers an area of 340 km². Guwahati is a major commercial and educational center of North-East India and is home to world class institutions such as the Indian Institute of Technology Guwahati. The city is also a major center for cultural activities and sports in the North Eastern region and for the administrative and political activities of Assam. The city is also an important hub for transportation in the North East Region. The name Guwahati is derived from two Assamese words: 'guwa' (areca nut) and 'haat' (market place). The name used to be spelled as Gowhatty (pre-colonial and colonial), standardized to Gauhati (colonial-British), which was then changed to the present form in the late 1980s to co