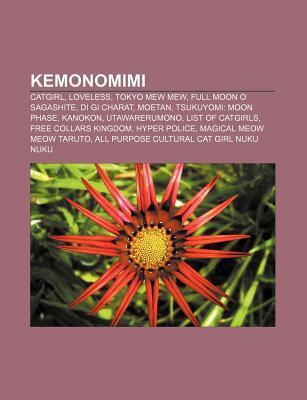 Source: Wikipedia. Pages: 50. Chapters: Catgirl, Loveless, Tokyo Mew Mew, Full Moon o Sagashite, Di Gi Charat, Moetan, Tsukuyomi: Moon Phase, Kanokon, Utawarerumono, List of catgirls, Free Collars Kingdom, Hyper Police, Magical Meow Meow Taruto, All Purpose Cultural Cat Girl Nuku Nuku, Kagihime Monogatari Eikyu Alice Rondo, Di Gi Charat Nyo!, Felicia, Nurse Witch Komugi, Panyo Panyo Di Gi Charat, Love Pistols, Dragon Half, Damekko Dobutsu, Foxy Lady, Ruff Love, Dejiko. Excerpt: Loveless Raburesu) is an ongoing fantasy manga by Yun Koga. It is currently serialized in the Japanese magazine Monthly Comic Zero Sum by Ichijinsha and collected in nine tankobon as of November 2009. Koga plans to end the manga at fifteen volumes. Tokyopop licensed Loveless for an English-language release in North America. It released the series from February 7, 2006 to September 1, 2008. A 12-episode anime television series adaptation was made by J.C.Staff, broadcast in a post-midnight slot on TV Asahi and ABC from April 2005 to June 2005. The anime series was licensed and released in the US by Media Blasters in a set of 3 DVDs in early 2006. The most immediately noticeable aspect of the story is that many characters are kemonomimi - cat-like features (in this case, ears and tails) are universal from birth, so there are as many catboys, including the protagonist, as there are catgirls. People in the Loveless universe lose their animal features when they lose their virginity. Those who no longer have animal features are differentiated by society as "adults", illustrating an underlying theme of sexuality in society. In his first day at his new school, twelve-year-old Ritsuka Aoyagi meets a mysterious twenty-year-old male named Soubi Agatsuma. Soubi claims to be a good friend of Ritsuka's brother, Seimei, who was murdered a few months earlier. Upon the inspection of Seimei's abandoned computer files, Ritsuka discovers that an organization called 'Seven Moons' was responsible for Seimei's death. As Ritsuka quickly discovers, Seimei and Soubi acted as a pair involved in spell battles invoked by carefully selected words. Now Soubi is Ritsuka's 'sentouki', or Fighter Unit, and Ritsuka is his 'Sacrifice'. Together, they challenge Seven Moons to find out the truth behind Seimei's murder and the reason for Ritsuka's amnesia, and form an intimate bond as they unravel the mystery. Ritsuka Aoyagi Aoyagi Ritsuka) Ritsuka is twelve years old and the protagonist of the story. He