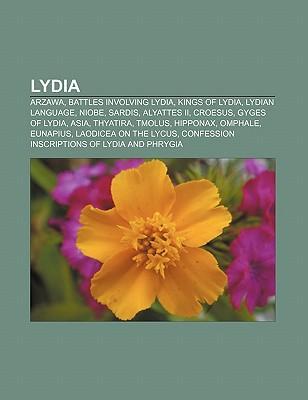 Source: Wikipedia. Pages: 34. Chapters: Arzawa, Battles involving Lydia, Kings of Lydia, Lydian language, Niobe, Sardis, Alyattes II, Croesus, Gyges of Lydia, Asia, Thyatira, Tmolus, Hipponax, Omphale, Eunapius, Laodicea on the Lycus, Confession inscriptions of Lydia and Phrygia, Karun Treasure, Battle of Thymbra, Lydian alphabet, Xanthus, Straton of Sardis, Battle of Pteria, Candaules, Battle of Halys, List of Kings of Lydia, Madduwatta, Lydians, Tripolis, Manes, Stratonicea, Bageis, Piyama-Kurunta, Lake Marmara, Siege of Sardis, Bularchus, Aryenis, Astarpa River, Pythius, Paleopolis, Lydia, Atys, Ardys II, Puranda, Lydus, Digda, Meles of Lydia, Ludim, Cadys, Sadyattes, Agron of Lydia, Antiochia, Lydia, Hyllus, Pactyes, Helenopolis in Lydia. Excerpt: Lydia (Assyrian: Luddu; Greek: ) was an Iron Age kingdom of western Asia Minor located generally east of ancient Ionia in the modern Turkish provinces of Manisa and inland Izmir. Its population spoke an Anatolian language known as Lydian. At its greatest extent, the Kingdom of Lydia covered all of western Anatolia. Lydia (known as Sparda by the Achaemenids) was a satrapy (province) of the Achaemenid Empire, with Sardis as its capital. Tabalus, appointed by Cyrus the Great was the first satrap (governor). (See: Lydia (satrapy)). Lydia was later the name for a Roman province. Coins were invented in Lydia around 610 BC. The endonym Sfard (the name the Lydians called themselves) survives in bilingual and trilingual stone-carved notices of the Achaemenid Empire: the satrapy of Sparda (Old Persian), Aramaic Saparda, Babylonian Sapardu, Elamitic ISbarda. These in the Greek tradition are associated with Sardis, the capital city of Gyges, constructed in the 7th century BC. The cultural ancestors appear to have been associated with or part of the Luwian political entity of Arzawa; yet Lydian is not part of the Luwian subgroup (as is Carian and Lycian). Despite events portrayed as historic in Virgil's epic poem the Aeneid and the Etruscan-like language of the Lemnos stele, the recent decipherment of Lydian and its classification as an Anatolian language mean that Etruscan and Lydian were not even in the same language family; moreover, there is no substantial evidence of Etruscans in Lydia. The boundaries of historical Lydia varied across the centuries. It was first bounded by Mysia, Caria, Phrygia and coastal Ionia. Later on, the military power of Alyattes and Croesus expanded Lydia into an empire, with its capital at Sardis, which controlled all Asia Minor west of the River Halys, except Lycia. Lydia never again shrank back into its original dimensions. After the Persian conquest the Maeander was regarded as its southern boundary, and under Rome, Lydia comprised the country b