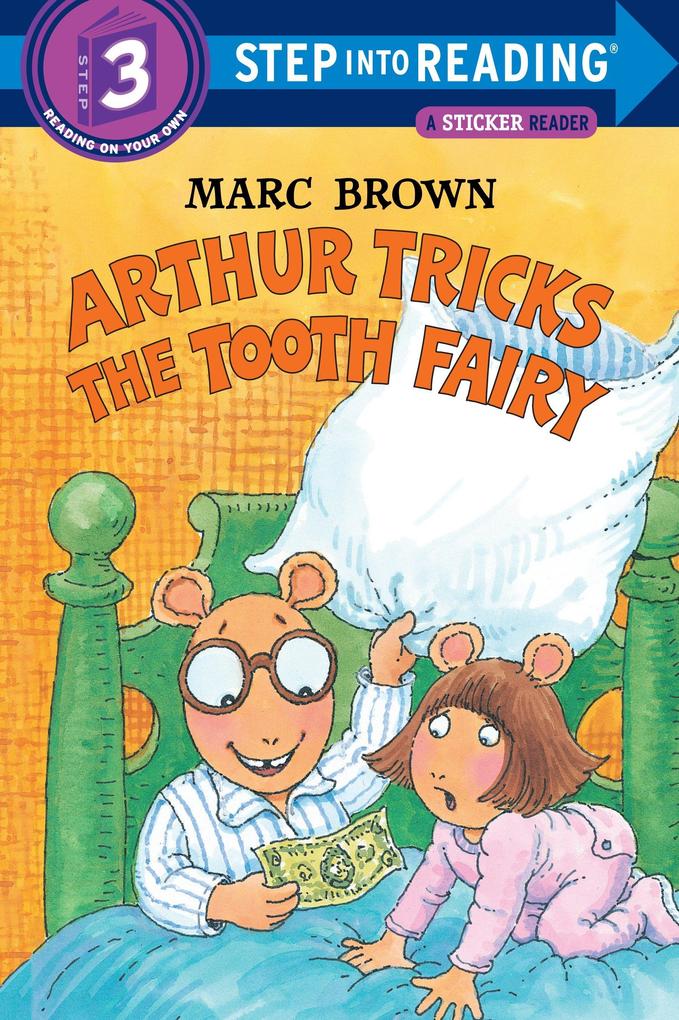 von Marc Brown
Empfohlen von 5 bis 8 Jahren. Sprache: Englisch.
Taschenbuch
D.W. is jealous when her big brother Arthur loses a tooth and gets a visit from the Tooth Fairy. Arthur explains that the Tooth Fairy comes only when you lose a tooth and put it under your pillow at night, so D.W. dreams up some hysterical (but unsu … weiterlesen
Geschenk per Mail versenden
Taschenbuch

D.W. is jealous when her big brother Arthur loses a tooth and gets a visit from the Tooth Fairy. Arthur explains that the Tooth Fairy comes only when you lose a tooth and put it under your pillow at night, so D.W. dreams up some hysterical (but unsuccessful) plans to trick her into coming. Finally, Arthur decides to reward D.W.'s efforts by playing Tooth Fairy himself! By matching picture stickers to words in the story, kids reinforce word recognition. With the extra stickers, they can create stories of their own.

Marc Brown is best known as the author and illustrator who created the beloved aardvark Arthur. This popular character was born one night over twenty years ago, when Brown was telling his oldest son, Tolon, a bedtime story. Most of the stories he told were about animals, but that night the story just happened to be about an aardvark. Brown has written and illustrated more than fifty Arthur and D.W. (Arthur's little sister) books since then. He has also illustrated twelve other books with his wife--author, illustrator, and psychologist Laurie Krasny Brown.

As a child, Marc Brown's passion for drawing was encouraged by his grandmother Thora, who saved his artwork in the bottom drawer of her bureau. "I knew it must be special," recalls Brown, "because she didn't save many things." His grandmother later provided an education fund that helped Brown pay for art school. He attended the Cleveland Institute of Art from 1964 to 1969.

Grandma Thora is just one person in Marc Brown's life who has afforded the inspiration for one of his characters. Many other characters are based on children he knew while he was growing up and going to school in Mill Creek, Pennsylvania. His sisters--Bonnie, Colleen, and Kimberly--have all served as models for his characters D.W. and Francine. Brown patterned Buster after Terry Johnson, his best friend in elementary school, while Mr. Ratburn is based on "the meanest algebra teacher ever."

Brown was born in 1946 in Erie, Pennsylvania. Before he created the Arthur series, he worked at a variety of jobs, including stints as a truck driver, short-order cook, college professor, soda jerk, actor, chicken farmer, and television art director. Now, in addition to developing the Arthur television series on PBS, Brown continues to create new books both for Random House Children's Publishing and Little, Brown Books for Young Readers.

Marc Brown lives in Hingham, Massachusetts, and Martha's Vineyard with Laurie and their young daughter, Eliza. He also has two grown sons, Tolon and Tucker. Brown looks to his three children for inspiration and story ideas. He also gets many suggestions from children he meets in schools, libraries, and bookstores around the country. "The most interesting--and the funniest--things," Brown says, "happen in real life."