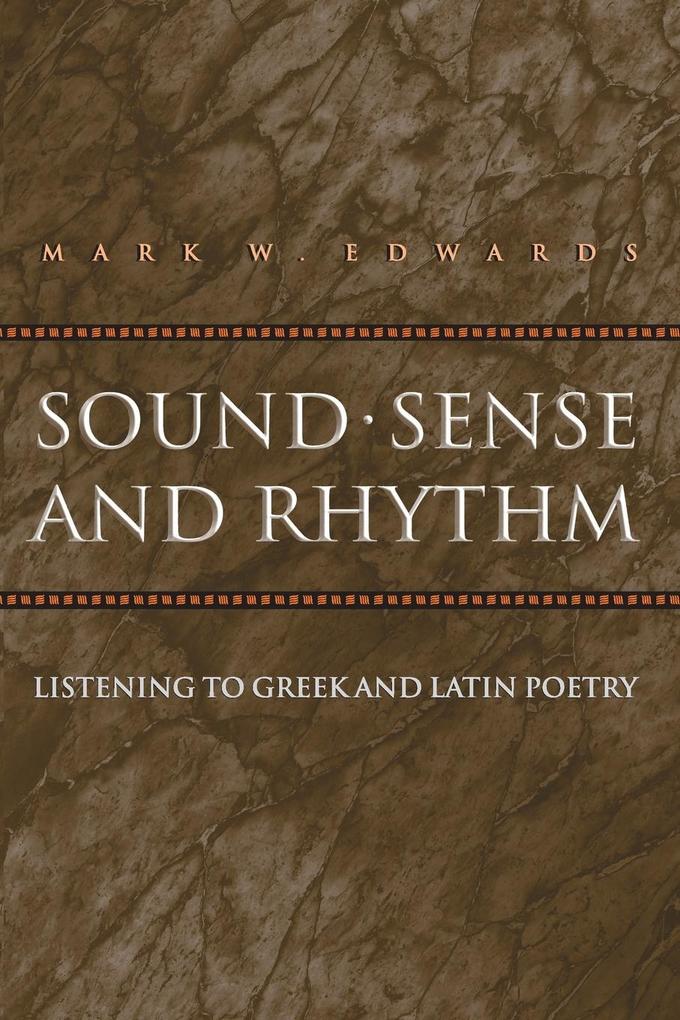 14% Rabatt sichern mit Gutscheincode: LIEBE14
​
This book concerns the way we read--or rather, imagine we are listening to--ancient Greek and Latin poetry. Through clear and penetrating analysis Mark Edwards shows how an understanding of the effects of word order and meter is vital for appreciatin … weiterlesen
Geschenk per Mail versenden
Taschenbuch

This book concerns the way we read--or rather, imagine we are listening to--ancient Greek and Latin poetry. Through clear and penetrating analysis Mark Edwards shows how an understanding of the effects of word order and meter is vital for appreciating the meaning of classical poetry, composed for listening audiences.

The first of four chapters examines Homer's emphasis of certain words by their positioning; a passage from the Iliad is analyzed, and a poem of Tennyson illustrates English parallels. The second considers Homer's techniques of disguising the break in the narrative when changing a scene's location or characters, to maintain his audience's attention. In the third we learn, partly through an English translation matching the rhythm, how Aeschylus chose and adapted meters to arouse listeners' emotions. The final chapter examines how Latin poets, particularly Propertius, infused their language with ambiguities and multiple meanings. An appendix examines the use of classical meters by twentieth-century American and English poets.

Based on the author's Martin Classical Lectures at Oberlin College in 1998, this book will enrich the appreciation of classicists and their students for the immense possibilities of the languages they read, translate, and teach. Since the Greek and Latin quotations are translated into English, it will also be welcomed by non-classicists as an aid to understanding the enormous influence of ancient Greek and Latin poetry on modern Western literature.

Mark W. Edwards is Emeritus Professor of Classics at Stanford University. He is the author of "Homer: Poet of the Iliad" and Volume 5 of "The Iliad: A Commentary".

"If by this book [Edwards] succeeds in heightening sensitivity to the features which he seeks to recuperate, he will indeed have done good service to his peers and successors ... and have given renewed hope for the continued vitality of ancient Greek and Latin literature."--Michael W. Haslam, Bryn Mawr Classical Review "This lively and often fascinating exposition of the sound of ancient poetry and its relation to sense and meaning, especially as perceived by the listening audience, is relevant to anyone who tries to understand ancient literature in context... [T]his book is enlightening for both scholars and general readers of the classics, indeed for those interested in the relation between sound and sense in any literature and for lovers of the poetry of any culture."--Jonathan J. Price, Religious Studies Review