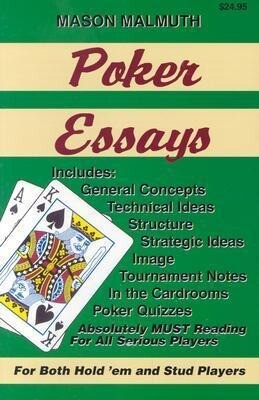 Poker is an extremely complicated game, especially if you play Texas hold 'em or seven-card stud. In addition, the typical opponent has gotten tougher as more good information has become available. As a result, those of you who just play tightly (also known as playing ABC) are able to win only at the lower limits. To win at higher limits requires not only numerous skills, but also a lot of thinking about the game. This text contains essays written before 1991, most of which originally appeared in "Card Player magazine. Topics covered include general concepts, technical ideas, structure, strategic ideas, image, tournament notes, in the cardrooms, and poker quizzes. In addition, advice is offered on jackpot games, handling pressure, why you lose, fluctuations, bankroll requirements, differences between stud and hold 'em, too many bad players, limit versus no-limit, thinking fast, weak-tight opponents, the best hold 'em seat, playing short-handed, playing loose or tight, appropriate image, being an alternate in tournaments, taking advantage of tight play in tournaments, behaving professionally, the future of poker, and much more.