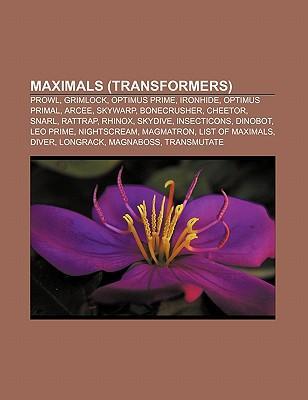 Source: Wikipedia. Pages: 60. Chapters: Prowl, Grimlock, Optimus Prime, Ironhide, Optimus Primal, Arcee, Skywarp, Bonecrusher, Cheetor, Snarl, Rattrap, Rhinox, Skydive, Insecticons, Dinobot, Leo Prime, Nightscream, Magmatron, List of Maximals, Diver, Longrack, Magnaboss, Transmutate, Heinlad, Break, Botanica, T-Wrecks, Tripledacus, Onyx Primal, Lio Junior, Rockbuster, Longhorn. Excerpt: Prowl is the name of several fictional characters in the Transformers universes. After Optimus Prime and Megatron, and along with Mirage, Starscream, and Ironhide, "Prowl" is one of the most re-used American names in the assorted Transformers series, and its use has become almost synonymous with Autobots who possess a police car alternate mode. Prowl (Cervo in Canada, Pantera in Italy) is an Autobot of many virtues - he is quiet, competent, loyal, and possessed of almost endless patience. When Optimus Prime appoints Prowl a task, he can be guaranteed that it will be completed to the best of Prowl's ability. Prowl is not given to speculation or estimation - the only realm in which he will work is that of the proven fact; if he can't explain it, he will not believe it. He hates doubt, and strives to make a situation as simple and logical as possible, purging excesses of concern from his mind by going to Optimus Prime for assurance. Prowl is friendly, but only as a listener; as a talker, he is not so sociable, entering a conversation usually only when someone makes an unreasonable remark, and demanding an explanation. Prowl's logic center is unquestionably the most powerful of all the Autobots', giving him the ability to analyze any combat situation almost instantaneously and then advise on the optimal course of action - a skill that makes him eminently suited to his role as the Autobots' military strategist and analyst. For example, he can compute the paths of movement of 800 separate moving objects and determine the proper countermove in half a second. In robot mode, he is armed with a pair of shoulder-mounted cannons which fire wire-guided incendiary missiles, and a semi-automatic rifle that shoots pellets filled with a highly corrosive acid. He transforms into a police car version of a Datsun Fairlady 280ZX. Prowl's straightforward mind means that non-linear thinking is one of his biggest weaknesses. Irrational situations and thought processes can sometimes scrambl