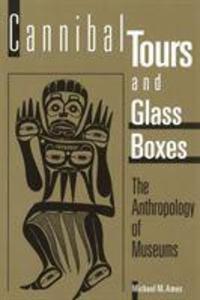 14% Rabatt sichern mit Gutscheincode: LIEBE14
​
Cannibal Tours and Glass Boxes poses a number of probing questions about the role and responsibility of museums and anthropology in the contemporary world.

Cannibal Tours and Glass Boxes poses a number of probing questions about the role and responsibility of museums and anthropology in the contemporary world.

The critical theory and practice of museums; The development of museums in the Western world - tensions between democratization and professionalization; Dilemmas of the practical anthropologist - public service versus professional interests; What could a social anthropologist do in a museum of anthropology? - the anthropology of museums and anthropology; How anthropologists stereotype other people; How anthropologists help to fabricate the cultures they study; The definition of Native art - the case of Willie Seaweed; The emerging Native view of history and culture; De-schooling the museum - a proposal to increase public access to museums and their resources; Are museums or anthropology really necessary any more?; World's Fairs and the constitution of society - the ideology of Expo '86; The Big Mac attack and the anthropology of everyday life; Cannibal tours, glass boxes and the politics of interpretation; Museums in the age of deconstruction.

This rich, complex, and compelling book represents a forceful scrutiny of the often polarized discourse on museums as well as an attempt to discredit one-sided arguments that prevent subtle and nuanced understandings of these institutions. ? Ames spends a good deal of time challenging the ways people think about, understand, and represent Native art. ? Ames raises interesting and important questions for anthropologists., for art historians, and for museum professionals. ? The struggle for genuine openness to a multitude of voices is by no means over; we should be grateful to Michael Ames for providing us with such a rational and thoughtful publication which represents a major contribution to that struggle. -- Aldona Jonaitis, Museum Anthropology "Cannibal Tours" has quite a bit to recommend it, and to recommend it to professional and lay readers alike. For the former, it offers some new and eminently practical insights not just about the present and future of museums, but about the relevance of anthropology to late 20th century society. In this sense the book is less true to its current subtitle than to the original "Anthropology of Anthropology," and so is deserving of being read as a critical commentary on where the discipline has been, and where it may be heading. And for the latter, Ames's well-written essays explain a good deal of what actually constitutes the work of museums, most importantly the production of those "cultural consumables" meant to inform and entertain the museum-going public. - Barnett Richling, Department of Sociology & Anthropology, Mount Saint Vincent University Museum curators, anthropologists, and students of popular culture will find much in "Cannibal Tours and Glass Boxes" to inform and provoke. It will . . . Encourage readers to challenge the common sense of their own particular situations and apply its lessons to the operations of their own institutions. -- Patricia McCormack, "Alberta Museums Review"