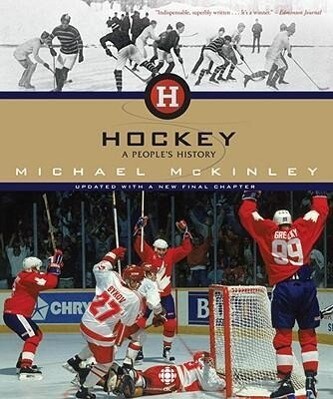 Now in paperback, updated with a new final chapter!

Lavishly illustrated, beautifully designed, impeccably researched, and wonderfully written, Hockey: A People's History is the altogether irresistible companion book to the CBC-Television series of the same name, airing in Fall 06. A must-have for every fan!

Hockey is not just Canada's national game, it is part of every Canadian's psyche, whether we like it or not. Watching it, playing it, coaching it, and talking about it are up there with eating on the list of the top ten things Canadians do most. In the first half of the last century it mirrored our increasing confidence as a nation and in the last years of the 1900s, which saw an aggressive but unsettling expansion of the game south of the border, it reflected our growing wariness of American influence on Canada.

Hockey: A People's History, like the ten-part CBC series it accompanies, tells the story of this breathtakingly fast game from its hotly contested origins, and the surge in its popularity after 1875, when it was first taken inside, through the rise and fall and rise again of women's hockey, the sagas of long-lost leagues, such as the Pacific Coast Hockey League and, more recently, the World Hockey Association, to the present day and the first-ever lockout of players by the one remaining league. In that time, while play has changed only slightly (every generation of Canadians has complained about the growing violence of the game) hockey itself has been transformed from a rough and ready winter sport to a business worth many billions of dollars, played by millionaires.

But Hockey: A People's History is not a business story, rather, it is the story of the men and woman who helped make the game what it is today.

It also tells the story of all the great moments in hockey: not just the unforgettable 1972 victory against Russia, but victories no less glorious at the time, such as the Leafs' previously unheard-of third consecutive Stanley Cup in 1949. Through its lavishly illustrated pages skate the players, the coaches, the owners, many of them still legendary, too many of them almost forgotten. They are the reason why Canadians have stayed true to the game.

The author of Putting a Roof on Winter (2000) and The Magnificent One: The Mario Lemieux Story (2002), Michael McKinley is also a journalist, a documentary filmmaker, and a screenwriter. A Vancouver native, he was educated at the University of British Columbia and at Oxford University. While at Oxford, he was also associate editor of the Oxford Dictionary of Modern Quotations. His journalism has appeared in major venues on two continents, including the Guardian, Sports Illustrated, the Los Angeles Times, the National Post, and Saturday Night. He has also written and produced several documentaries for CNN, and has even written one episode of South Park. He lives in Vancouver.