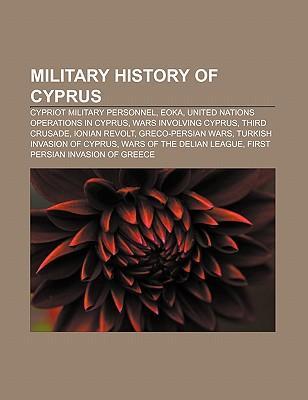 Source: Wikipedia. Pages: 46. Chapters: Cypriot military personnel, EOKA, United Nations operations in Cyprus, Wars involving Cyprus, Third Crusade, Ionian Revolt, Greco-Persian Wars, Turkish invasion of Cyprus, Wars of the Delian League, First Persian invasion of Greece, United Nations High Commissioner for Refugees Representation in Cyprus, Georgios Grivas, United Nations Buffer Zone in Cyprus, United Nations Peacekeeping Force in Cyprus, James I of Cyprus, Grigoris Afxentiou, Evagoras Pallikarides, Stasanor, Cyprus Regiment, EOKA B, Enosis, Alexandrian Crusade, Markos Drakos, Imprisoned Graves, Battle of Spilia, Kyriakos Matsis, Onesilus, Stylianos Lenas, PEKA, Alkimos Neolaia EOKA, Red House Camp. Excerpt: The Greco-Persian Wars (also often called the Persian Wars) were a series of conflicts between the Achaemenid Empire of Persia and city-states of the Hellenic world that started in 499 BC and lasted until 449 BC. The collision between the fractious political world of the Greeks and the enormous empire of the Persians began when Cyrus the Great conquered Ionia in 547 BC. Struggling to rule the independent-minded cities of Ionia, the Persians appointed tyrants to rule each of them. This would prove the source of much trouble for both Greeks and Persians alike. In 499 BC, the then tyrant of Miletus, Aristagoras, embarked on an expedition to conquer the island of Naxos, with Persian support. However, the expedition was a debacle, and pre-empting his dismissal, Aristagoras incited the whole of Hellenic Asia Minor into rebellion against the Persians. This was the beginning of the Ionian Revolt, which would last until 493 BC, progressively drawing more regions of Asia Minor into the conflict. Aristagoras secured military support from Athens and Eretria, and in 498 BC, these forces helped to capture and burn the Persian regional capital of Sardis. The Persian king Darius the Great vowed to have revenge on Athens and Eretria for this act. The revolt continued, with the two sides effectively stalemated throughout 497-495 BC. In 494 BC, the Persians regrouped, and attacked the epicentre of the revolt in Miletus. At the Battle of Lade, the Ionians suffered a decisive defeat, and the rebellion collapsed, with the final members being stamped out the following year. Seeking to secure his empire from further revolts, and from the interference of the mainland Greeks, Darius embarked on a scheme to conquer Greece, and to punish Athens and Eretria for the burning of Sardis. The first Persian invasion of Greece began in 492 BC, with the Persian general Mardonius subjugating Thrace and Macedon before several mishaps forced an early end to the campaign. In 490 BC a second force was sent