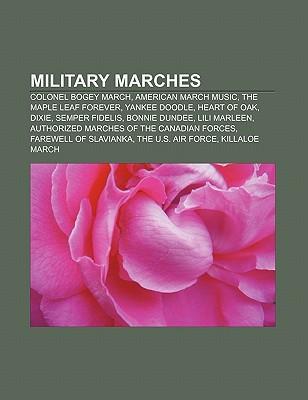 Source: Wikipedia. Pages: 78. Chapters: Colonel Bogey March, American march music, The Maple Leaf Forever, Yankee Doodle, Heart of Oak, Dixie, Semper fidelis, Bonnie Dundee, Lili Marleen, Authorized marches of the Canadian Forces, Farewell of Slavianka, The U.S. Air Force, Killaloe March, The Stars and Stripes Forever, Eternal Father, Strong to Save, The British Grenadiers, The Army Goes Rolling Along, Ah! ça ira, Wartime Friendship, Sarie Marais, Men of Harlech, Garryowen, Marines' Hymn, John Peel, Highland Laddie, Anchors Aweigh, Den Pobedy, Scotland the Brave, List of marches of the British Armed Forces, Invercargill March, The Washington Post, The Lincolnshire Poacher, The Liberty Bell, El Capitan, Svyaschennaya Voyna, Prince of Denmark's March, Blood on the Risers, Porilaisten marssi, V Put, Radetzky March, Three Marches Militaires, Entrance of the Gladiators, March of the Soviet Tankmen, Jäger March, A Life on the Ocean Wave, Sussex by the Sea, Le Boudin, The Banks of Newfoundland, MarS na Drinu, Precision, The Voice of the Guns, Royal Air Force March Past, Semper Paratus, Spanish Air Force Anthem, Dambusters March, The Gladiator March, Soldiers of the King, Hands Across the Sea, Le Régiment de Sambre et Meuse, The Old Brigade, The Keel Row, The Thunderer, Preußens Gloria, The U. S. Field Artillery March, High School Cadets, Napalm Sticks to Kids, King Cotton, Deshon Ka Sartaj, Manhattan Beach, Skywatch march, God Bless the Prince of Wales, Chimes of Liberty, Fairest of the Fair, Here's a Health unto His Majesty, Sons of the Brave, The Athole Highlanders' Farewell to Loch Katrine, U.S. Field Artillery, The Gallant Seventh, The Road to Boston, Marcia Carolus Rex, The Mercury March. Excerpt: "Dixie", also known as "I Wish I Was in Dixie", "Dixie's Land", and other titles, is a popular American song. It is one of the most distinctively American musical products of the 19th century, and probably the best-known song to have come out of blackface minstrelsy. Although not a folk song at its creation, "Dixie" has since entered the American folk vernacular. The song likely cemented the word "Dixie" in the American vocabulary as a synonym for the Southern United States. Most sources credit Ohio-born Daniel Decatur Emmett with the song's composition; however many other people have claimed to have composed "Dixie", even during Emmett's lifetime. Compounding the problem of definitively establishing the song's authorship are Emmett's own confused accounts of its writing, and his tardiness in registering the song's copyright. The latest challenge has come on behalf of the Snowden Family of Knox County, Ohio, who may have collaborated with Emmett to write "Dixie". The song originated in the blackface minstrel shows of the 1850s and quickly grew famous across the United States. Its lyrics, written in a comic, exaggerated version of African American Vernacular English, tell the story of a freed black slave pining for the plantation of his birth. During the American Civil War, "Dixie" was adopted as a de facto anthem of the Confederacy. New versions appeared at this time that more explicitly tied the song to the events of the Civil War. Since the advent of the North American Civil Rights Movement, many have identified the lyrics of the song with the iconography and ideology of the Old South. Today, "Dixie" is sometimes considered offensive, and its critics link the act of singing it to sympathy for the concept of slavery in the Amer...