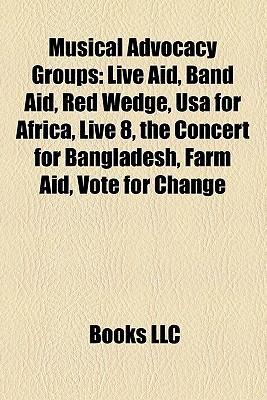 Source: Wikipedia. Pages: 40. Chapters: Live Aid, Band Aid, Red Wedge, USA for Africa, Live 8, The Concert for Bangladesh, Farm Aid, Live Earth, Vote for Change, Artists United Against Apartheid, Rock Against Racism, Hear 'n Aid, Consolidated, Rock Aid Armenia, YU Rock Misija, Axis of Justice, Rock for Choice, The Voice Project, Northern Lights, Rock Against Sexism, Tsunami Relief Cardiff, Music for UNICEF Concert, The Kids of Widney High, Rock Against Bush, Musicians United for Safe Energy, Artists and songs at both Live Aid and Live 8, Hrvatski Band Aid, Love Music Hate Racism, One World Project, Music Council of Australia, Music for Miners, No Nukes group, Sol y Lluvia, Società Italiana di Musica Moderna. Excerpt: Live Aid was a dual-venue concert that was held on 13 July 1985. The event was organized by Bob Geldof and Midge Ure to raise funds for relief of the ongoing Ethiopian famine. Billed as the "global jukebox", the event was held simultaneously in Wembley Stadium in London, England, United Kingdom (attended by 72,000 people) and John F. Kennedy Stadium in Philadelphia, Pennsylvania, United States (attended by about 99,000 people). On the same day, concerts inspired by the initiative happened in other countries, such as Australia and Germany. It was one of the largest-scale satellite link-ups and television broadcasts of all time: an estimated 2 billion viewers, across 60 countries, watched the live broadcast. The concert was conceived as a follow-on to another Geldof/Goldsmith project, the successful charity single "Do They Know It's Christmas?", performed by a collection of British and Irish music acts billed as 'Band Aid' and released the previous winter. The concert grew in scope, as more acts were added on both sides of the Atlantic. As a charity fundraiser, the concert far exceeded its goals: on a television programme in 2001, one of the organisers stated that while initially it had been hoped that Live Aid would raise £1 million with the help of Wembley tickets costing £25.00 each, the final figure was £150 million (approx. $283.6 million). Partly in recognition of the Live Aid effort, Geldof received an honorary knighthood. Music promoter Harvey Goldsmith was also instrumental in bringing the plans of Geldof and Ure to fruition. The concert began at 12:00 BST (7:00, EST) at Wembley Stadium in the United Kingdom. It continued at JFK Stadium in the United States, starting at 13:51 BST (8:51, EST). The UK's Wembley performances ended at 22:00 BST (17:00 or 5:00 PM, EST). The JFK performances and whole concert in the US ended at 04:05 BST July 14 (23:05 or 11:05 PM, EST). (See the full schedule of the concert here ). Thus, the concert continued for 16 hours, but sin