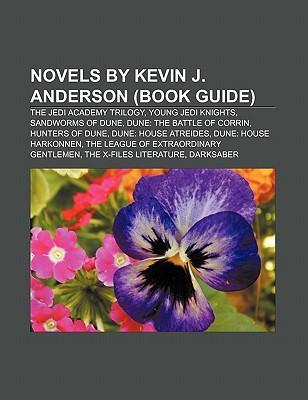 Source: Wikipedia. Commentary (novels not included). Pages: 25. Chapters: The Jedi Academy trilogy, Young Jedi Knights, Sandworms of Dune, Dune: The Battle of Corrin, Hunters of Dune, Dune: House Atreides, Dune: House Harkonnen, The League of Extraordinary Gentlemen, The X-Files literature, Darksaber, Dune: The Butlerian Jihad, Paul of Dune, Captain Nemo: The Fantastic History of a Dark Genius, Dune: The Machine Crusade, Hellhole, Jedi Search, The Winds of Dune, Dark Apprentice, Dune: House Corrino, Gamearth Trilogy, Champions of the Force, The Martian War, Prodigal Son. Excerpt: Young Jedi Knights is a Star Wars series by science fiction writer Kevin J. Anderson and his wife Rebecca Moesta. The series covers the Jedi training of Jacen and Jaina Solo, the twin children of Han Solo and Leia Organa Solo. The series begins 23 years ABY, when the twins are fourteen years old. Originally intended to cover six novels, the series eventually stretched to fourteen volumes. It spanned three distinct plot arcs: Because it is geared towards younger readers, the Young Jedi Knights series tackles issues such as racism and drug abuse that are relevant in both the Star Wars universe and our present-day world. It is also notable for introducing a new generation of Jedi who are featured heavily in later series such as the New Jedi Order, Dark Nest, and Legacy of the Force. Jacen SoloThe teenage son of Han Solo and Leia Organa Solo. Jacen is adept at communicating through the Force with animals. He also has an affinity for telling bad jokes.Jaina SoloThe teenage daughter of Han Solo and Leia Organa Solo. Like her father, Jaina is a talented pilot and mechanic.LowbaccaThe Wookiee nephew of Chewbacca. He is known to his friends as Lowie, and enjoys tinkering with computers.Em TeedeeLong form of M-TD, a miniature protocol droid that Lowbacca wears on his hip. Em Teedee also translates for Lowbacca. Since he is programed by C-3PO, Em Teedee has a tendency to be long-winded.Tenel KaIs a young princess of Hapes, though she prefers to be known as a warrior of Dathomir.ZekkThe childhood friend of Jaina and Jacen, Zekk is adept at finding hidden things.BrakissA dark Jedi who creates the Shadow Academy, the dark Jedi analog to the Jedi academyAnja GallandroThe daughter of the notorious gunslinger Gallandro, who was thought to have been killed by Han Solo in one of his earliest adventures.Other charactersLuke Skywalker, Han Solo, Princess Leia Organa, Chewbacca, Raynar Thul, C-3PO Heirs of the Force is about the adventures of Jacen Solo and Jaina Solo's time at the Jedi