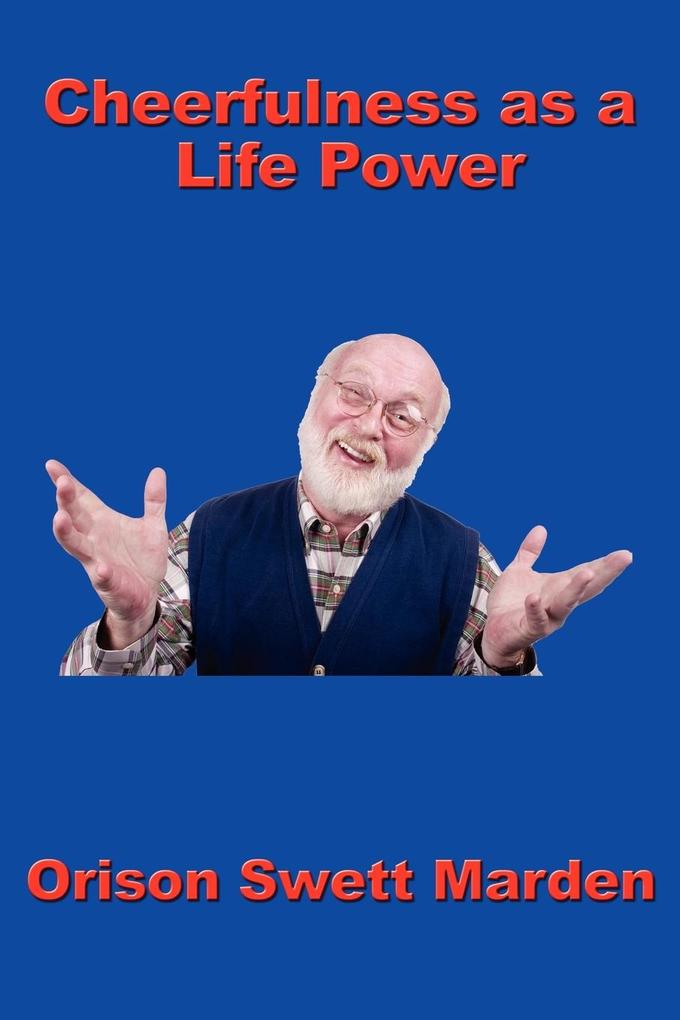 Cheerfulness as a Life Power

von Orison Swett Marden
Paperback. Sprache: Englisch.
Taschenbuch
In Cheerfulness as a Life Power you will learn just how valuable happiness is. Happy people live longer, they get promoted more often, and they make more money. This book will show you how to be happier in your life, and more importantly how to use t … weiterlesen
Dieser Artikel ist auch verfügbar als:
Geschenk per Mail versenden
Jetzt nur

In Cheerfulness as a Life Power you will learn just how valuable happiness is. Happy people live longer, they get promoted more often, and they make more money. This book will show you how to be happier in your life, and more importantly how to use that happiness to be more successful. First comes the happiness and then the success, not the other way around as we so often think.

Dr. Orison Swett Marden (1848-1924) was an American inspirational author who wrote about achieving success in life and founded SUCCESS magazine in 1897. His writings discuss common-sense principles and virtues that make for a well-rounded, successful life. Many of his ideas are based on New Thought philosophy.
His first book, Pushing to the Front (1894), became an instant best-seller. Marden later published fifty or more books and booklets, averaging two titles per year
At age forty-four, Marden switched careers to professional authorship. It was a bold decision to which he had given careful thought, having suffered repeated business reversals and a hotel fire. His fervent sense of idealism along with an urgent sense of "now or never" in middle life spurred him onward in his new goal.
Margaret Connolly, a contemporary who worked for Marden's publishing firm in the early 1900s, describes the incident of the hotel fire, his narrow escape from death, and the loss of his original manuscript, which he later re-wrote and entitled Pushing to the Front. Marden's unwavering determination to start from scratch after this devastating loss was characteristic of the man and his writings. Connolly writes:
Over five thousand pages of manuscripts - the fruit of all the spare time he had been able to snatch from nearly fifteen crowded years of business life - had gone up in smoke...
Having nothing but his nightshirt on when he escaped from the fire, he went down the street to provide himself with necessary clothing. As soon as this had been attended to, he bought a twenty-five cent notebook, and, while the ruins of the hotel were still smoking, began to rewrite from memory the manuscript of his dream book.[6]
Overwhelmed and heartbroken, Marden picked himself up and started all over again. With little money, but with lots of time on his hands, he decided to rewrite the manuscript. He took a train for Boston, boarded an inexpensive little room, and threw himself energetically into his work. In a short time, he finished writing not only his dream book - Pushing to the Front - but also a second book, Architects of Fate. He then made three manuscripts of Pushing to the Front and submitted them to three Boston publishing firms for approval. All three firms wanted to publish the book upon a first reading of the manuscript. Ultimately, it was published by Houghton, Mifflin & Company (Boston) and presented to the public on December 1, 1894