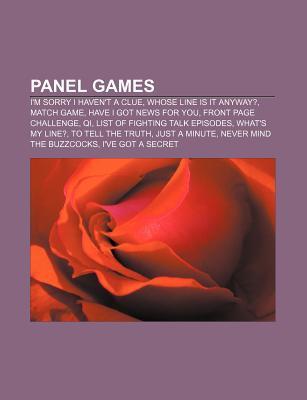 I'm Sorry I Haven't a Clue, Whose Line Is It Anyway?, Match Game, Have I Got News for You, Front Page Challenge, QI, List of Fighting Talk episodes, What's My Line?, To Tell the Truth, Just a Minute, Never Mind the Buzzcocks.
Paperback.
Sprache: Englisch.

Source: Wikipedia. Pages: 112. Chapters: I'm Sorry I Haven't a Clue, Whose Line Is It Anyway?, Match Game, Have I Got News for You, Front Page Challenge, QI, List of Fighting Talk episodes, What's My Line?, To Tell the Truth, Just a Minute, Never Mind the Buzzcocks, I've Got a Secret, Shooting Stars, Mock the Week, The Museum of Curiosity, The Unbelievable Truth, They Think It's All Over, Spicks and Specks, Celebrity Juice, Talkin' 'Bout Your Generation, Figure It Out, A Question of Sport, A League of Their Own, Win, Lose or Draw, The Name's the Same, The Bubble, Would I Lie to You?, The News Quiz, As Seen on TV, The King is Dead, We Need Answers, 8 out of 10 Cats, Down You Go, Argumental, Call My Bluff, Act Your Age, Storybook Squares, If I Ruled the World, Top of the Form, Masquerade Party, The What in the World? Quiz, Make Me Laugh, Through the Keyhole, The Blame Game, It's News to Me, Space Cadets, De Lama's, I Guess That's Why They Call It The News, You Have Been Watching, Hollywood Connection, Ask Rhod Gilbert, Wordplay, 3rd Degree, Just Men!, School's Out, Get the Message, Dit was het nieuws, Panel game, Bognor or Bust, Best of the Worst, Does the Team Think?, Missing Links, Petrolheads, What's Going On?, The Book Quiz, Quote... Unquote, 29 Minutes of Fame, Sweet F.A., Night Fever, And Then You Die, Sweethearts, Many a Slip, Relatively Speaking, What the Dickens, The Movie Masters, Whodunnit?, Whispers, The Trophy Room. Excerpt: QI (Quite Interesting) is a British comedy panel game television quiz show created and co-produced by John Lloyd, hosted by Stephen Fry, and featuring permanent panellist Alan Davies. Until late 2008 it was first shown on BBC Four and repeated on BBC Two, with syndicated episodes of previous series shown on Dave. QI has the highest viewing figures for any show on BBC Four and UKTV G2 (now Dave). From series "F" in late 2008 the show moved to BBC One, with extended-length repeats on BBC Two (entitled QI XL). Series "G"-the longest series to date with 16 episodes-was broadcast on BBC One in 2009-10. In 2010, the regular show moved to a pre-watershed slot, with the extended edition still shown after the watershed. Series H began filming in May 2010 and started its run from 17 September 2010 on BBC One and BBC HD (with the XL episode shown the next day on BBC Two). In March 2011, it was announced that for series I, its ninth series, the show would return to a post-watershed slot on BBC Two, with Fry and Davies remaining as host and regular panellist respectively. Most of the questions are extremely obscure, making it unlikely that the correct answer will be given. To compensate, points are awarded not only for right answers, but also for interesting ones, regardless of whether they are right or even relate to the original question. Conversely, points are deducted from a panellist who gives "answers which are not only wrong, but pathetically obvious", typically answers that are generally believed to be true but in fact are not. Points are also often deducted if an obvious joke answer is given. In addition, bonus points are often awarded or deducted for various challenges or incorrect references to a certain thing or place, varying from show to show. The panel consists of four participants: three rotating and one regular, Alan Davies, who has the seat to Stephen Fry's immediate right. Davies has appeared in every episode, except for one that was themed on "Divination": he