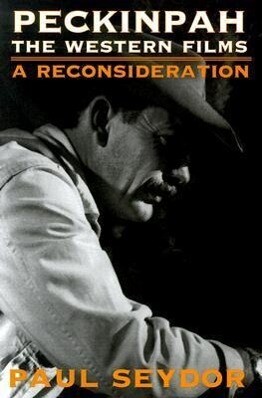 Sprache: Englisch.
Taschenbuch
Peckinpah: The Western Films, first published when the director's reputation was at low ebb, helped lead a generation of readers and filmgoers to a full and enduring appreciation of Peckinpah's landmark films. This expanded, revised edition includes … weiterlesen
Geschenk per Mail versenden
Taschenbuch

Peckinpah: The Western Films, first published when the director's reputation was at low ebb, helped lead a generation of readers and filmgoers to a full and enduring appreciation of Peckinpah's landmark films. This expanded, revised edition includes a new section on the personal significance of The Wild Bunch to Peckinpah as well as a complete account of the successful, but troubled, efforts to get a fully authorized director's cut released. Seydor also adds a great wealth of biographical detail that has surfaced since the director's death and includes a new chapter on Noon Wine, credited with bringing Peckinpah's television work to a fitting resolution and preparing his way for The Wild Bunch.

"In this new, expanded, and handsomely printed edition of his 1980 study, Seydor demonstrates that any discussion of Peckinpah's films has to be contained in both the context of the politics of Hollywood and the greater American literary tradition... For any student of American film or of American Western literature, this volume is a must. It's hard to imagine trying to teach a film course-not merely a course in western film but in any film-without it... Exceedingly well written and thoroughly documented...[this book is] a thorough study of one American artist's work, his pain, and his incredible contribution to our culture." - Clay Reynolds, Western American Literature "Seydor in his brilliant book makes us realize how movies such as The Wild Bunch or Ride the High Country emerged not so much from a single, fertile imagination as from the dusty crossroads of America's quintessential mythic tale and Peckinpah's own peculiar unconscious. The Western seemed made for Peckinpah... Seydor is an academic with a doctorate and a film editor with impressive feature credentials. He brings both experiences to bear in this thoughtful, elegantly written book. " - Gregg Bachman, Creative Screenwriting "Reading Seydor's book is galvanizing; it makes the reader a devout believer in the power of the medium, convincing him or her that celluloid running through a projector's gate can beam great art onto a white wall." DGA Magazine "Exceedingly well written and thoroughly documented ..[A] thorough study of one American artist's work, his pain and his contribution to our culture." - Express News, San Antonio, TX ADVANCE PRAISE "The new edition of Peckinpah: The Western Films-A Reconsideration is literally incomparable-the only study of the works of a major film director by a critic who writes both as a former academician with a Ph.D. in literature and as a voting member of that far more exclusive National Academy of Motion Picture Arts and Sciences. After all these years, this is more than ever a trail-blazing book, required reading for lovers of film and literature, and for literary theorists as well as cinema theorists." - Hershel Parker, author of Melville: A Biography, Volume 1, 1819-1855 "The most comprehensive and penetrating critical study of Peckinpah's work." - Variety"Stands as a shining example of how a single book from a small publisher can have a profound and lasting impact on our culture. The most penetrating study of Peckinpah, as well as one of the finest pieces of film criticism ever written... It taught me how to look at movies." - From the Foreword by David Weddle, author of If They Move, Kill 'Em: The Life and Times of Sam Peckinpah REVIEWS FROM EARLIER EDITION "First-rate... Its enthusiasm for its subject is among its prime values, for it teaches us to understand, or to understand anew, an artist we may have overlooked, or dismissed, or misinterpreted." - Frank McConnell, Quarterly Review of Film Studies "Solid and sophisticated... Seydor writes of Peckinpah's films in finer detail than anyone else has." - Ernest Callenbach, Film Quarterly "At a time when Sam Peckinpah's reputation is scraping bottom, Paul Seydor's critical study bravely asserts Peckinpah's importance...A valuable study of a major auteur director." - Choice "This intensively researched, admiring, but never merely worshipful study of the westerns of Sam Peckinpah is one of the best tributes any director has yet received." - Booklist "Important... Interestingly ties Peckinpah into the 'cult of masculinity' so indigenous to American culture and literature." - Library Journal "Few critics have documented the agonies of Hollywood moviemaking as scarily well as Paul Seydor does in Peckinpah: The Western Films." - Michael Sragow, Los Angeles Herald Examiner "An exceptional job of explaining the central role of violence in [Peckinpah's] films." - Michael T. Isenberg, The Midwest Review "The book is rich in its insight into the mythology of the West, and the author is most illuminating when he discusses the exploitation of these myths by Peckinpah in developing the favorite themes of regeneration and individualism. Seydor's accomplishment is considerable." - Timothy P. Donovan, Journal of the West "A long overdue tribute to the screenwriter-director of action western movies... An exceptionally well-made biography of an astute writer-director that will stand as a definitive analysis." - David Winston York, West Coast Review of Books "Six of the director's movies, unified by themes, feelings and ideas, are incisively appraised by Paul Seydor. In-depth interviews bring out Peckinpah's complex personality, his assertive views on film art and his impatience with outsiders' perceptions of his style." - George L. George, American Cinematographer "A masterful critic ... correctly assesses Peckinpah's stature as a major artist and details the unbelievably shoddy treatment afforded his films by hostile producers and studio hit men." - Grover Lewis, New West "A highly literate work which will provide Peckinpah fans with more arguments in support of his brilliance." - Mark Busby, Western American Literature "Seydor's analysis of The Wild Bunch ... is one of the finest analyses of a film that I have ever read, and his chapters on Peckinpah's other westerns are equally brilliant." - Kenneth Seib, Fresno Bee "Sam Peckinpah is, arguably, the greatest American film maker to emerge since the Second World War. Paul Seydor's work chronicles and critiques his Western films, unearths new material on his early years, and follows Peckinpah's unsteady course through the wilderness of Hollywood. Seydor argues for this unique director's place alongside artists the magnitude of Melville and Hemingway-both a powerful premise and a compelling reading experience." - Walter Hill "A great critical study of a great filmmaker. Seydor's new revision of his own book is a must read for anyone interested in Peckinpah, the Western, or American film." - Ron Shelton, film writer/director