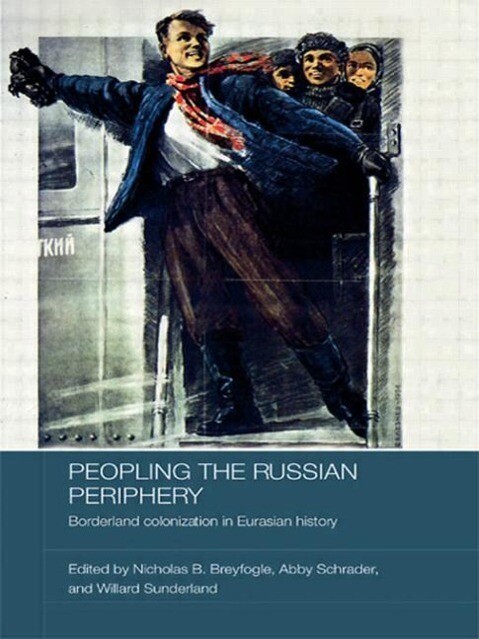 Borderland Colonization in Eurasian History. 7 Line drawings, black and white; 8 Halftones, black and white; 2…
Taschenbuch
Though usually forgotten in general surveys of European colonization, the Russians were among the greatest colonizers of the Old World, eventually settling across most of the immense expanse of Northern Europe and Asia, from the Baltic and the Pacifi … weiterlesen
Geschenk per Mail versenden
Taschenbuch

Though usually forgotten in general surveys of European colonization, the Russians were among the greatest colonizers of the Old World, eventually settling across most of the immense expanse of Northern Europe and Asia, from the Baltic and the Pacific, and from the Arctic Ocean to Central Asia. This book makes a unique contribution to our understanding of the Eurasian past by examining the policies, practices, cultural representations, and daily-life experiences of Slavic settlement in non-Russian regions of Eurasia from the time of Ivan the Terrible to the nuclear era. The movement of tens of millions of Slavic settlers was a central component of Russian empire-building, and of the everyday life of numerous social and ethnic groups and remains a crucial regional security issue today, yet it remains relatively understudied. Peopling the Russian Periphery redresses this omission through a detailed exploration of the varied meanings and dynamics of Slavic settlement from the sixteenth century to the 1960s.Providing an account of the different approaches of settlement and expansion that were adopted in different periods of history, it includes detailed case studies of particular episodes of migration. Written by upcoming and established experts in Russian history, with exceptional geographical and chronological breadth, this book provides a thorough examination of the history of Slavic settlement and migration from the Muscovite to the Soviet era. It will be of great interest to students and scholars of Russian history, comparative history of colonization, migration, interethnic contact, environmental history and European Imperialism.

Introduction Muscovy, Migration, and Expansion
1. Claiming Siberia: Colonial Possession and Property Holding in Seventeenth-Century Muscovy
2. Containment vs. Colonization: Muscovite Approaches to Settling the Steppe
3. Grant, Settle, Negotiate: Military Servitors in the Middle Volga Region Colonization on the Imperial Russian Frontier
4. Agricultural Settlement and Environmental Change on the Open Steppes of Southeastern European Russia in the Nineteenth Century
5. Towards the 'Ethic of Empire' on the Siberian Borderland: The Peculiar Case of the 'Rock People,' 1791-1878
6. Resettling People, Unsettling the Empire: Migration, Colonization, and the Challenge of Governance, 1861-1917
7. 'Down with Progress': The Elusive Quest for Modernity in Russian Tashkent, 1905-14 Population Politics and the Soviet Experiment
8. The Aesthetic of Stalinist Planning and the World of the Special Villages
9. Acclimatization: The Shifting Science of Settlement
10. 'Those Who Hurry to the Far East': Readers, Dreamers, and Volunteers
11. The 'Planet of One Hundred Languages': Ethnic Relations and Soviet Identity in the Virgin Lands. Conclusion: Colonizing Eurasia

Taschenbuch
Ideologies of Eastness in Central and…
von Tomasz (Universi…