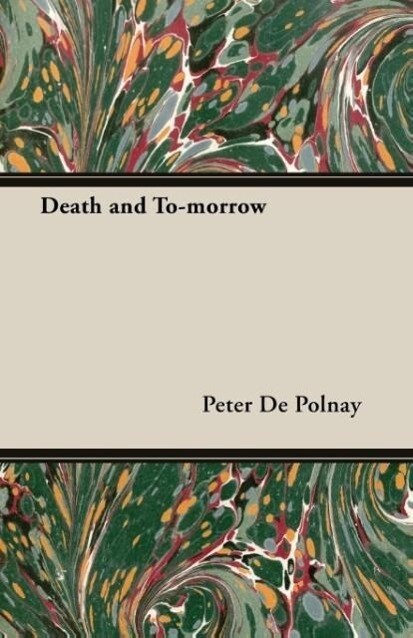 von Peter De Polnay
Paperback. Sprache: Englisch.
Taschenbuch
DEATH AND TOMORROW by Peter de Polnay PREFACE IT was hot and clammy in the train. The train was crowded with sons and daughters of Switzerland: they were hot and very neutral the train was bound for AixlesBatns. It was the 26th August, 1939. The worl … weiterlesen
Geschenk per Mail versenden
Taschenbuch

DEATH AND TOMORROW by Peter de Polnay PREFACE IT was hot and clammy in the train. The train was crowded with sons and daughters of Switzerland: they were hot and very neutral the train was bound for AixlesBatns. It was the 26th August, 1939. The world was in for another crisis, but the crisis did not seem to affect the blue of the Mediterranean nor the corresponding blue of the sky. The bay of Villefranche, now bereft of the American cruiser, Omaha, was like a blue tongue. I was sorry to leave the Riviera, but I had no choice I was leaving BeaulieusurMer on account of my friend. Since the Riviera coastline as far as the Var was to be evacuated in the event of war, I had decided to take her away to the safekeeping of mutual friends who loved her and would look after her whatever happened. My friend, the truest and best friend in the world, was Dodo, my Skye terrier bitch. She came into my life before her eyes were open, she became an integral part of it and I could no longer imagine life without her. Our friendship was based on mutual understanding we were always of the same mood we understood each other and made allowances for each other naturally, she had to make more allowances than I. She never troubled to learn the mechanical parlour tricks of the proselytes. Her eyes were large and very much alive, her ears were like orchids. I believed nothing would happen: perhaps a second Munich. It seemed a matter of mutual bluff to me, with the Allies far from prepared and the Germans preferring to conquer Europe without having to fight for it. In Nice a French Air Force officer got into the train. Mobilization was in full swing. We talked, the officer and I. We agreed that war was improbable. But what about peace ? How could peace break out ?w I asked. We couldnt answer the question. My friend was sitting on the floor and her head moved in rhythm with the train. Later the officer said: The Poles are a very fine people, but I dont think the people of France will be very keen on dying for a distant town like Danzig, It would be different if France were attacked directly, as in 1914. My memory buried that remark, but when I stood alone and bewildered in Paris after the downfall of France, it came back to me. The officer also said that mobilization wras going like clockwork. That was true. helping me, for they are still there in France, bleeding and suffering under the German boot. There were many Germans who spoke frankly and even confidentially to me: I dont want them to suffer for that. And its not my business to give away in this book the traitors and vendus, for the French will deal with them when I ranee is liberated anyway, who am I to sit in judgment ? Therefore, I must give most people fictitious names and I must disguise the exact whereabouts of certain localities, for those bulletheaded, kindly fellows, who potter about in Occupied France wearing mackintoshes and carrying attachecases under their arms commonly called the Gestapo, are no fools and would find the people who helped me.