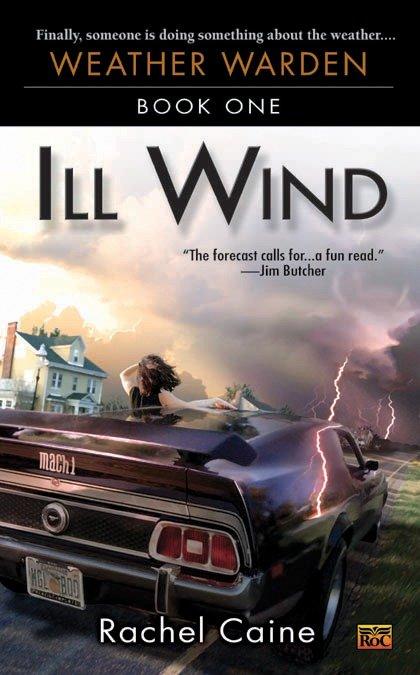 Ill Wind: Book One of the Weather Warden

von Rachel Caine
Empfohlen ab 18 Jahre. Sprache: Englisch.
Taschenbuch
Someone's finally doing something about the weather...in the first in this series by the New York Times bestselling author of Ink and Bone and the Morganville Vampires series.

Someone's finally doing something about the weather...in the first in this series by the New York Times bestselling author of Ink and Bone and the Morganville Vampires series.

It's "A FUN READ" (Jim Butcher) from "A FIRST-CLASS STORYTELLER" (Charlaine Harris)...

The Wardens Association has been around pretty much forever. Some Wardens control Fire, others control Earth or Water or Wind-and the most powerful can control more than one. Without wardens, Mother Nature would wipe humanity off the face of the earth...

Joanne Baldwin is a Weather Warden. Usually, all it takes is a wave of her hand to tame the most violent weather. But now, Joanne is trying to outrun another kind of storm: accusations of corruption and murder. So, she's resorting to the very human tactic of running for her life…

Her only hope is Lewis, the most powerful warden known. Unfortunately, he's also on the run from the Council. It seems he's stolen not one but three bottles of Djinn-making him the most wanted man on earth. And without Lewis, Joanne's chances of surviving are as good as a snowball in-well, a place she may be headed. So, she and her classic Mustang are racing hard to find him-because there's some bad weather closing in fast...

Rachel Caine is the author of several bestselling series, including the Revivalist and Outcast Season novels. Among her many popular novels are Daylighters, The Dead Girls' Dance, Terminated, and Black Dawn.

Rachel Caine is the author of more than twenty novels, including the "Weather Warden" series. She was born at White Sands Missile Range, which people who know her say explains a lot. She has been an accountant, a professional musician, and an insurance investigator, and still carries on a secret identity in the corporate world. She and her husband, fantasy artist R. Cat Conrad, live in Texas with their iguanas, Popeye and Darwin; a mali uromastyx named (appropriately) O'Malley; and a leopard tortoise named Shelley (for the poet, of course).