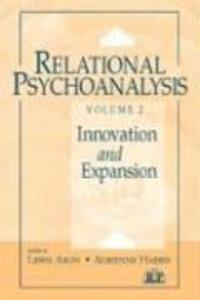 Innovation and Expansion. Sprache: Englisch.
Taschenbuch
Brings together key papers that exemplify the continuing growth and refinement of the relational sensibility. The topics covered in Volume 2 reflect both the evolution of psychoanalysis and the unique pathways that leading relational writers have bee … weiterlesen
Dieser Artikel ist auch verfügbar als:
Geschenk per Mail versenden
Taschenbuch

Brings together key papers that exemplify the continuing growth and refinement of the relational sensibility. The topics covered in Volume 2 reflect both the evolution of psychoanalysis and the unique pathways that leading relational writers have been pursuing and in some cases establishing.

Aron, Harris, Introduction. Part I: Therapeutic Action. Ehrenberg, The Intimate Edge of Therapeutic Relatedness. Slochower, Holding: Something Old and Something New. Cooper, Levit, Old and New Objects in Fairbairnian and American Relational Theory. Slavin, Kriegman, Why the Analyst Needs to Change: Toward a Theory of Conflict, Negotiation, and Mutual Imfluence in the Therapeutic Process. Maroda, Show Some Emotion: Completing the Cycle of Affective Communication. Berman, Psychoanalytic Supervision: The Intersubjective Development. Jacobs, On Misreading and Misleading Patients: Some Reflections on Communications, Miscommunications, and Countertransference Enactments. Part II: Relational Perspectives on Development. Beebe, Lachmann, Representation and Internalization in Infancy: Three Principles of Salience. Fonagy, Target, Mentalization and the Changing Aims of Child Psychoanalysis. Coates, Having a Mind of One's Own and Holding the Other in Mind: Commentary on Paper by Peter Fonagy and Mary Target. Lyons-Ruth, The Two-Person Unconscious: Intersubjective Dialogue, Enactive Relational Representation, and the Emergence of New Forms of Relational Organization. Part III: Social and Cultural Dimensions of Relationality. Altman, Psychoanalysis and the Urban Poor. Dimen, Perversion Is Us: Eight Notes. Leary, Race, Self-Disclosure, and "Forbidden Talk": Race and Ethnicity in Contemporary Psychoanalytic Practice. Corbett, More Life: Centrality and Marginality in Human Development.

"In their introduction Aron and Harris make it clear that they are aware of the dangers of relational psychoanalysis becoming a school or of being vague and eclectic. Following the sensibilities of the first volume, Aron and Harris continue to refer to a tradition rather than a school." - Psychologist-Psychoanalyst "The papers published in Volume 2 reflect an important aspect of psychoanalytic evolution, and indicate some of the pathways that relational authors have been pursuing. This volume attests the growth and discrimination of the relational sensibility. There is for me a kernel of truth in almost all the contributions. In sum, I consider this collection an important contribution to our field. The papers in it look beyond their immediate concerns to address vital questions about the history of theoretical and technical change in psychoanalysis, about comparative psychoanalysis, and about the sociology of psychoanalytic knowledge. It meets for me the criterion of being greater than the sum of its parts, and I suspect that it will be useful and enlightening for psychoanalysts of all persuasions, at all levels of training and expertise." - Arnold D. Richards, Journal of the American Psychoanalytic Association, Vol. 54, No. 4, 2006 "The volume provides a valuable resource collection of important papers in the historical development of the relational approach to analysis." - W.W. Meissner, Bulletin of the Menninger Clinic, Vol. 71, No. 3, Summer 2007

Taschenbuch
Moments of Meeting in Psychoanalysis

Taschenbuch
Couples on the Couch