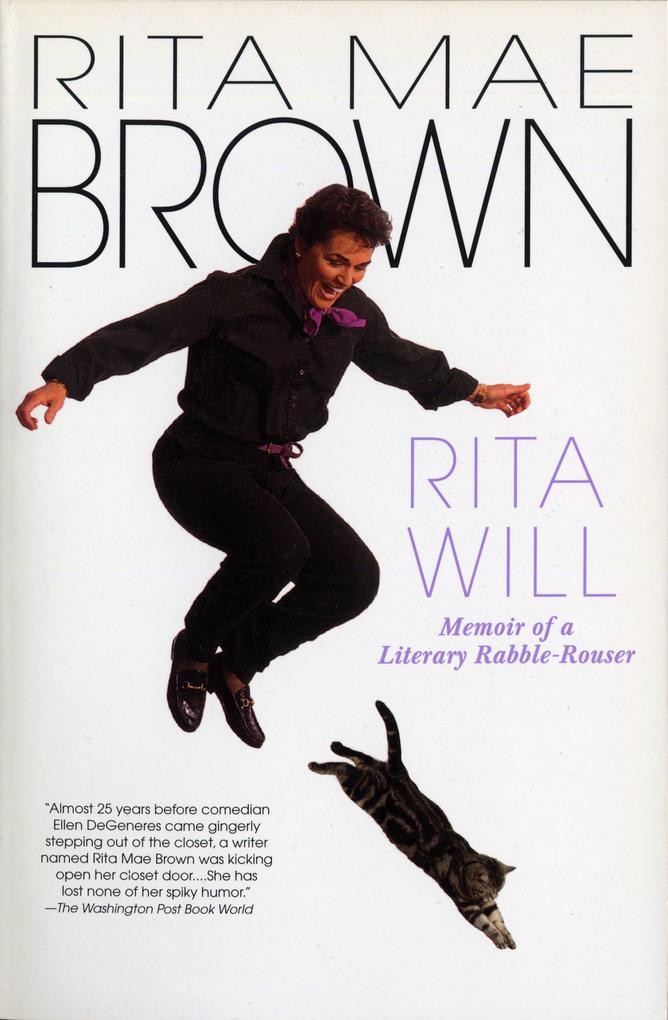 Rita Will: Memoir of a Literary Rabble-Rouser

When Rita Mae Brown writes, people often end up laughing out loud. So naturally, when the bestselling author of Rubyfruit Jungle, Venus Envy, and the Mrs. Murphy mystery series writes about her own life, it's a hoot, a rollicking ride with an independent, opinionated woman who changed literary history--the first openly lesbian writer to break into the mainstream. Now, in Rita Will, she tells all...and tells it hilariously.

It is often said that the best comedy springs from hard times. And Rita Mae Brown has seen plenty of those. In this irresistibly readable memoir, she recounts the drama of her birth as the illegitimate daughter of a flighty blue blood who left her in an orphanage. The sickly baby was quickly rescued by relatives eager to adopt her but afraid she would not survive the long journey home. Her determination to live, and shock everyone by doing it, has become a metaphor for her entire life.

Though raised by these loving adoptive parents and a wacky host of other interfering kin, Rita Mae Brown learned early on to be tough and to speak her mind. It was her refusal to be anything but herself that often brought her the most trouble. Here she tells of her tempestuous relationship with her adoptive mother, the mythic Juts of the novels Six of One and Bingo, who called her "the ill," for illegitimate, whenever she lost her temper, and who swore she'd introduce Rita Mae to the social graces, including the dreaded cotillion, even if it killed them both.

Here, too, Rita Mae reveals how her headstrong support of social causes almost cost her a hard-earned education and her outspokenness in the early days of the women's movement got her drummed out of NOW, and how the release of her first novel, the scandalous classic Rubyfruit Jungle, made her an overnight phenomenon--the most famous openly gay person in America--and took her from the heights of the New York Times bestseller list to the surreal playhouse that is Hollywood.

Through it all, Rita Mae has drawn strength from her profound bond with animals, from her abiding affection for the South and its native tongue, and from the great passions of her life. She writes with close-to-the-bone honesty about woman-woman love...including her love-at-first-sight relationship with a popular actor and her headline-making romance with tennis great Martina Navratilova. With her trademark humor, she unflinchingly bares her own flaws, flouting public opinion yet displaying the unflappable good sense that shows through everything she writes.

A look into a woman's mind and a writer's irrepressible spirit, Rita Will is quintessential Rita Mae Brown--a book that feels like a kick-your-shoes-off visit with an old friend.

"If you think the famous lesbian novelist tells all, you're right...Rita Mae [is] funny and thoughtful as all get-out. Read her book."
--Liz Smith

"Breezy, accessible, lively...There's no doubt that Brown can tell a story with the best of them. Rita Will is like a long story told on a country porch."
--San Francisco Chronicle Book Review
Kunden, die diesen Artikel gekauft haben, kauften auch
Schreiben Sie eine Rezension