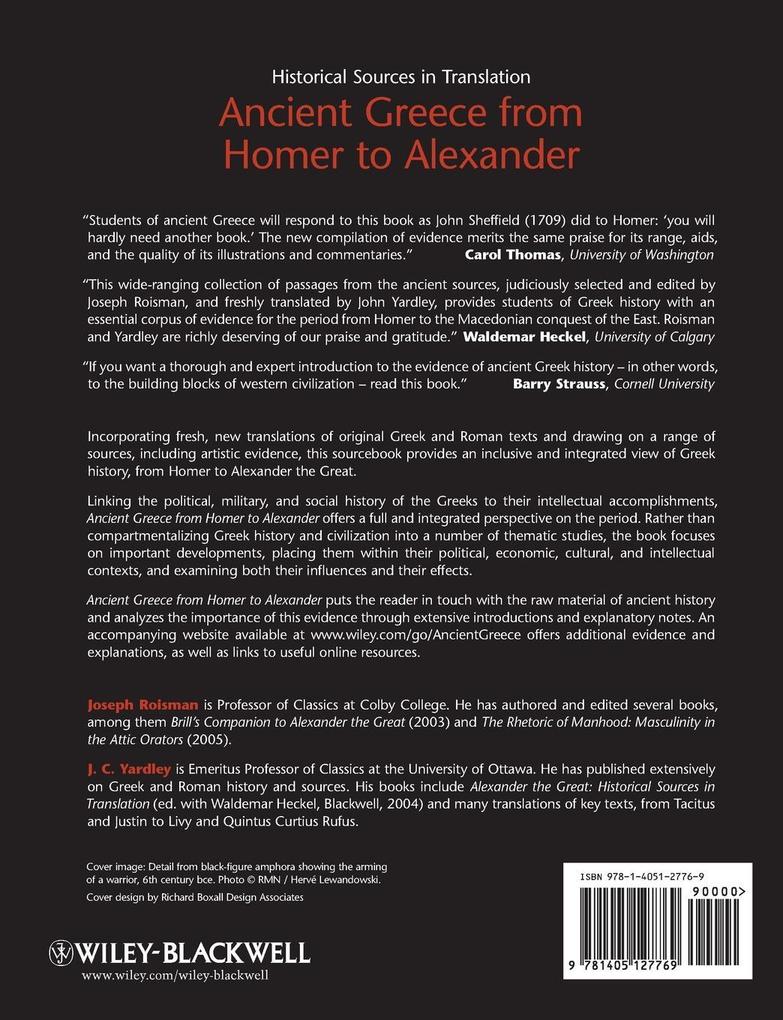 Ancient Greece from Homer to A

Titel: Ancient Greece from Homer to A
Autor/en: Roisman

With fresh, new translations and extensive introductions and annotations, this sourcebook provides an inclusive and integrated view of Greek history, from Homer to Alexander the Great.
* New translations of original sources are contextualized by insightful introductions and annotations
* Includes a range of literary, artistic and material evidence from the Homeric, Archaic and Classical Ages
* Focuses on important developments as well as specific themes to create an integrated perspective on the period
* Links the political and social history of the Greeks to their intellectual accomplishments
* Includes an up-to-date bibliography of seminal scholarship
* An accompanying website offers additional evidence and explanations, as well as links to useful online resources

Introduction: The Evidence for Greek History and Culture.

4. Settlements Across the Sea: Greek "Colonization".

8. Hoplites and Their Values.

9. Archaic Athens From Draco to Solon.

15. The Ionian Revolt: Persians and Greeks.

21. The Administration of the Empire and the Athenian Tribute Quota Lists.

23. The Sophists, Athenian Democracy and Its Critics.

24. The Causes of the Peloponnesian War and the Athenian and Spartan Strategies.

26. Finances and Allies During the Archidamian War.

29. The Rule of the Thirty, The Athenian Amnesty and Socrates' Trial.

30. Sparta After The Peloponnesian War: Politics, Wealth and Demography.

35. Running the Athenian Polis: Politics, Finances, Grain and Trade in the Fourth Century.

Joseph Roisman is Professor of Classics at Colby College. He has authored and edited several books, among them Brill's Companion to Alexander the Great (2003) and The Rhetoric of Manhood: Masculinity in the Attic Orators (2005). J.C. Yardley is Emeritus Professor of Classics at the University of Ottawa. He has published extensively on Greek and Roman history and sources. His books include Alexander the Great: Historical Sources in Translation (ed. with Waldemar Heckel, Blackwell, 2004) and many translations of key texts, from Tacitus and Justin to Livy and Quintus Curtius Rufus.

"A welcome contribution to introductory studies on Greekhistory, and aims at presenting not just the historical narrationbut also the primary sources on which history is based... Whatevertheir background, all readers will benefit from this study, sinceRoisman manages to cover thoroughly the main aspects of eachperiod. In addition to the historical narrative the book issupplemented with the basic secondary literature, the primarysources and, clearly one of its strengths, e- sources on the web.Thus, the reader gets a good idea both of the valid scholarly viewsand of what material exists on the internet to support these views.This work is surely a first step for everyone who wishes to exploreGreek history. Finally, what is most helpful and educative is thatRoisman s study lets the facts speak for themselves so that readerscan form their own opinion about them. It seems that this kind ofself-learning is the organising principle of the book. To myknowledge this is the first study of this kind, and I wouldstrongly recommend its translation into other languages so thatmore students and the general public can benefit from it." (Panagiotis Paraskevas, Bryn Mawr Classical Review , 1October 2012)
"Headlined 'Historical Sources in Translation , thissubstantial 642-page annotated sourcebook is just the thing toplace in the hands of bright sixth-form students doing the OCRAS/A2 Ancient History paper, or of undergraduates enjoying theproliferating Classical Studies courses at university." (TheAnglo-Hellenic Review, Autumn 2011)