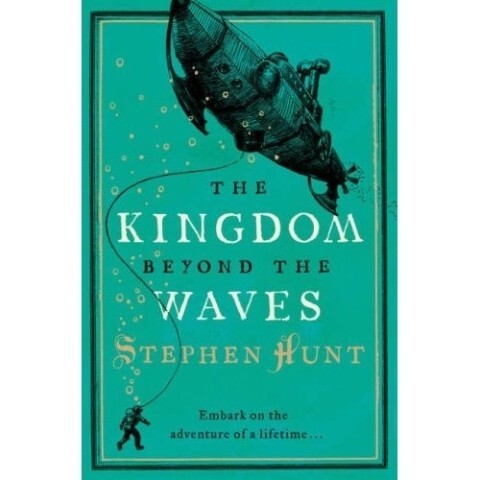 The Kingdom Beyond the Waves

von Stephen Hunt
Sprache: Englisch.
Taschenbuch
From the author of The Court of the Air comes a hugely engaging, Victorian-style adventure, filled with perilous quests, dastardly deeds and deadly intrigue - perfect for all fans of Philip Pullman and Susanna Clarke

Titel: The Kingdom Beyond the Waves
Autor/en: Stephen Hunt

From the author of The Court of the Air comes a hugely engaging, Victorian-style adventure, filled with perilous quests, dastardly deeds and deadly intrigue - perfect for all fans of Philip Pullman and Susanna Clarke

Stephen Hunt has worked as a writer, editor and publisher for a number of magazines and national newspaper groups in the UK, and is currently employed on an artificial intelligence project. He is also the founder of www.SFcrowsnest.com, one of the oldest and most popular fan-run science fiction and fantasy websites, with nearly three quarters of a million readers each month. Born in Canada, the author presently lives in London, as well as spending part of the year with his family in Spain

'A ripping yarn ! the story pounds along ! constant inventiveness keeps the reader hooked ! the finale is a cracking succession of cliffhangers and surprise comebacks. Great fun' SFX 'More than a dash of Jules Verne ! an entertaining and imaginative journey into the unknown' DeathRay 'To say this book is action packed is almost and understatement ! a wonderful escapist yarn! Definitely a book to take with you on a long flight' Interzone Praise for The Court of the Air: 'An inventive, ambitious work, full of wonders and marvels' Lisa Tuttle, The Times 'The characters are convincing and colourful, but the real achievement is the setting, a hellish take on Victorian London ! the depth and complexity of Hunt's vision makes it compulsive reading for all ages' Guardian 'Wonderfully assured ! Hunt knows what his audience like and gives it to them with a sardonic wit and carefully developed tension' Time Out 'Rich and colourful ! keeps you engrossed ! a confident, audacious novel' SFX 'Like a magpie, Stephen Hunt has plucked colourful events from history and politics and used them for inspiration ! Hunts tells his full-blooded tale with lip-smacking relish, revealing a vivid, often gruesome imagination ! 'The Court of the Air' brims with originality and, from the first, its chase-filled plot never lets up' Starburst 'The best book of 2007 ! Think Joan Aiken for grown-ups, with echoes of Susanna Clarke ! hugely enjoyable' Historical Novels Review

Schreiben Sie eine Bewertung für: The Kingdom Beyond the Waves