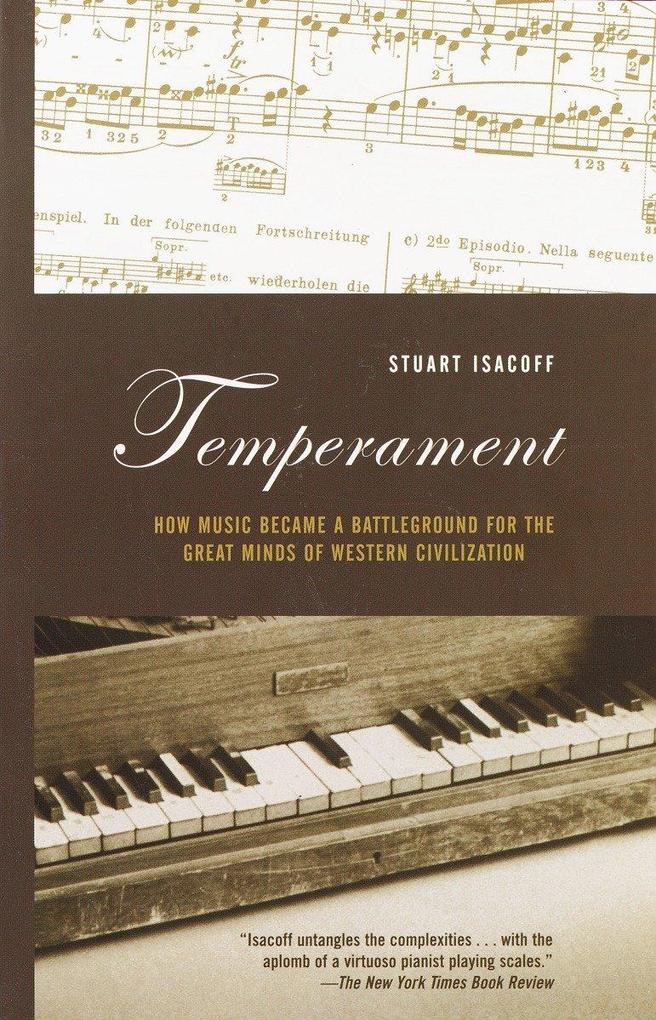 Temperament: How Music Became a Battleground for the Great Minds of Western Civilization

Few music lovers realize that the arrangement of notes on today's pianos was once regarded as a crime against God and nature, or that such legendary thinkers as Pythagoras, Plato, da Vinci, Galileo, Kepler, Descartes, Newton and Rousseau played a role in the controversy. Indeed, from the time of the Ancient Greeks through the eras of Renaissance scientists and Enlightenment philosophers, the relationship between the notes of the musical scale was seen as a key to the very nature of the universe.

In this engaging and accessible account, Stuart Isacoff leads us through the battles over that scale, placing them in the context of quarrels in the worlds of art, philosophy, religion, politics and science. The contentious adoption of the modern tuning system known as equal temperament called into question beliefs that had lasted nearly two millenia-and also made possible the music of Beethoven, Schubert, Chopin, Debussy, and all who followed. Filled with original insights, fascinating anecdotes, and portraits of some of the greatest geniuses of all time, Temperament is that rare book that will delight the novice and expert alike.

Stuart Isacoff is a pianist, composer and writer, and the founding editor of the magazine Piano Today. A winner of the prestigious ASCAP Deems Taylor Award for excellence in writing about music, he is a frequent contributor to The Wall Street Journal and many music periodicals. Mr. Isacoff is a featured lecturer at The Metropolitan Museum of Art in New York, where his series is entitled "The Language Of Music.” He has given lectures and piano performances at many venues here and abroad, including The Chamber Music Society of Lincoln Center, The Verbier Festival and Academy, The Gina Bachauer Foundation, The Miami Piano Festival, The Portland Piano Festival, The Irving S. Gilmore International Keyboard Festival, the Juilliard School, Sarah Lawrence, Cal Arts, and Harvard University, and at such scientific institutions and conferences as the Los Alamos National Laboratory, the Bradbury Science Museum, the Sarzana (Italy) Festival of Mind and the Perimeter Institute for Theoretical Physics. His work in interdisciplinary studies has also brought him to such venues as the Vero Beach Museum of Art, where he lectured on links between kinetic art and music.Mr. Isacoff teaches a graduate course in the philosophy of music and an undergraduate survey in the history of Western music at the Purchase College Conservatory of Music (SUNY), and a course in the art of writing at St. John's University. He has also taught musical improvisation at William Paterson University and at festivals around the world. His written works include jazz-influenced compositions and instructional materials, published by Boosey & Hawkes, G. Schirmer, Warner Bros. Publications, Carl Fischer, and Ekay Music, Inc. His piano recitals often combine classical repertoire with jazz improvisation, demonstrating the threads that connect musical works created centuries and continents apart.