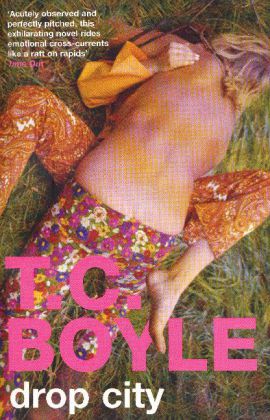 It is the seventies, at the height of flower power. Star has just joined Drop City, a hippie commune in sunny California living the simple, natural life. But underneath the drugs, music and transcendent bliss, she slowly discovers tensions and sexual rivalries that threaten to split the community apart. A world away in Boynton, a tiny town in the interior of Alaska, Sess Harder, a pioneer who actually does live off the land, hunting, trapping and fishing, yearns for someone to share the harsh winters with him. When the authorities threaten to close down Drop City, the hippies abandon camp and head up north to Alaska, the last frontier. But neither they nor the inhabitants of Boynton are completely prepared for each other - and as the two communities collide, unexpected friendships and dangerous enmities are born.

T.C. Boyle's novels include WORLD'S END winner of the PEN/Faulkner Award for Fiction, THE TORTILLA CURTAIN, RIVEN ROCK,WATER MUSIC and FRIEND OF THE EARTH. His stories appear regularly in most major magazines, including The New Yorker, Esquire, Playboy, Granta and The Paris Review. He lives in California.