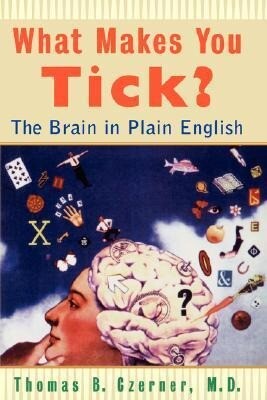 What Makes You Tick?: The Brain in Plain English

von Thomas B. Czerner
Sprache: Englisch.
Taschenbuch
What is consciousness? Is there really such a thing as free will? Is there a physiological basis for an eternal soul? In What Makes You Tick?, Thomas Czerner' s elegant and accessible introduction to brain research, you' ll encounter the scientists a … weiterlesen
Geschenk per Mail versenden
Taschenbuch

Titel: What Makes You Tick?: The Brain in Plain English
Autor/en: Thomas B. Czerner

What is consciousness? Is there really such a thing as free will? Is there a physiological basis for an eternal soul? In What Makes You Tick?, Thomas Czerner' s elegant and accessible introduction to brain research, you' ll encounter the scientists and discoveries that have exponentially increased our knowledge of the brain and its functions, most significantly in the last few years. Here, Czerner has translated the arcane language of scientific journals into a highly readable Baedeker of the brain, outlining all that is known about the modern brain and the amazing promise this understanding holds for the future. In addition to tracing the vast web of cerebral roadways, Czerner deftly follows the larger historical detective story that stars neurologists and their forebears, from philosophers Descartes and Kant, to twentieth-century polymaths Francis Crick and Edwin Land, to computer scientists, who have found that the brain' s parallel circuitry offers an ideal design model for microprocessors. By shining a light on the darkest recesses of our own minds, What Makes You Tick? illuminates the greatest gifts the world of science bestows, in addition to touching on the ethical dilemmas facing us as we begin to alter ourselves on the cellular level. Above all, What Makes You Tick? will forever change the way you think about thinking.

Preface. Introduction. Exploring a Recently Discovered Galaxy: Off to See the Wizard. Stardust and the Music of the Neuron: Impulses and How They Move You. The Ghost in the Machine: The Elusive Homunculus. The Photon and Your Brain: Your Quiet Conversation with Nature. The Intelligence of the Neuron: Your Life Depends on the Decisons of Individual Cells. The Moving Parts of Your Brain: The Photon Illuminates the Lilliputian Machinery of the Neuron. The Yellow Brick Road: To Your Biological Clock and Internal Maps of the Universe. The Emerald City: The Secrets of the Most Complex Functions of the Brain. Beyond the Yellow Brick Road: The Brain Is a Supercomputer and Much, Much More. The Shape of an Idea: Neuronal Ensembles. Pure Wizardry: Matching Your Behavior to Your Situation. Your Personal Chemistry: From Molecules to Moods and from Genes to Behavior. The Final Chord. Notes. Index.

THOMAS B. CZERNER, M.D., is Clinical Professor of Ophthalmology at the University of California School of Medicine in San Francisco and is a senior faculty consultant of the Ophthalmology Residency Training Program at the California Pacific Medical Center.

"...a highly recommended, enjoyable book on a fascinating subject. Certainly one for the present list of a friend or relative..." (M2 Best Books, 16 September 2002)